Apropos the ‘reputation as a liar’ thing for John Key

More on the issue of the public perception (reputation) of the NZ prime minister and his veracity, here’s Otago University’s Bryce Edwards’ take on it, from TV3’s Frontline this morning: 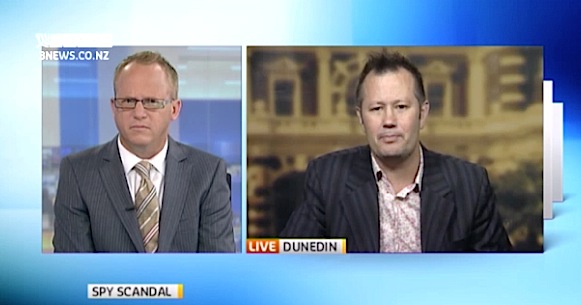 “As usual with these scandals, it’s not the so-called ‘crime’ in the first place… it’s the cover-up. It’s how the politician handles things, and he’s handled it appallingly, and the consensus seems to be that he’s lied in Parliament and he’s lied to the media – at least, he hasn’t told the truth.
“The public don’t like that. The public don’t like their Prime Minister to be a liar.” [emphasis added]

— Read Dan Satherley’s transcript/article John Key: The honeymoon ‘is over’ and watch the video on demand at 3news.co.nz

Pretty bracing stuff. But is Bryce right that ‘the honeymoon is over’? He could be. Dunno.

Mr Key’s charm (not meant as a pejorative term) has held him high for a long time. Persistently high. As I’ve said many times before, John Key does a hell of a lot right as a politician. The temptation for those of the left wing persuasion is to urgently, feverishly read the tea leaves (ha) for any sign of a cooling of the warm public support the National Party leader has enjoyed for so long.

The seductive urge to see the world as you want it to be, not as it is, has led to people for years asking various forms of the question ‘Has John Key reached his use-by date?’ — while his opinion poll support remains rusted to the dial. 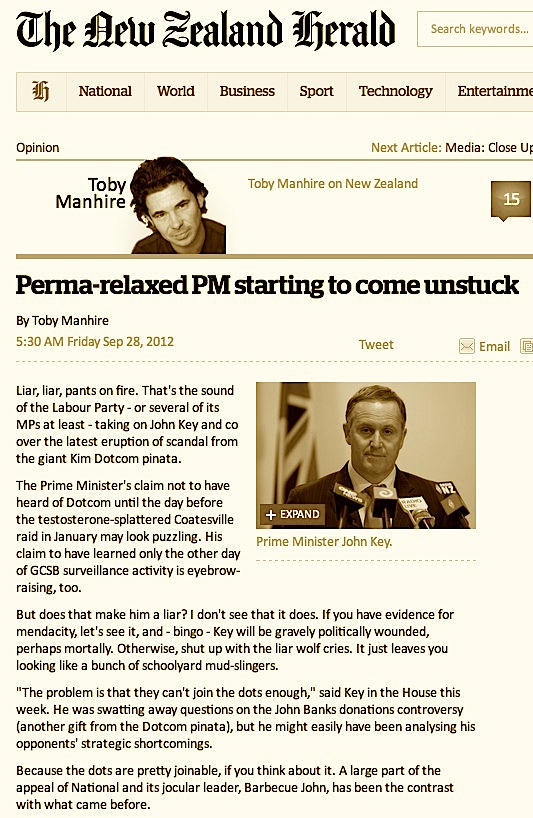 I still remember the opening of an excellent Toby Manhire column (for the removal of doubt: by excellent, I mean I agreed with him) Perma-relaxed PM starting to come unstuck:

Liar, liar, pants on fire. That’s the sound of the Labour Party – or several of its MPs at least – taking on John Key and co over the latest eruption of scandal from the giant Kim Dotcom pinata.
The Prime Minister’s claim not to have heard of Dotcom until the day before the testosterone-splattered Coatesville raid in January may look puzzling. His claim to have learned only the other day of GCSB surveillance activity is eyebrow-raising, too.
But does that make him a liar? I don’t see that it does. If you have evidence for mendacity, let’s see it, and – bingo – Key will be gravely politically wounded, perhaps mortally. Otherwise, shut up with the liar wolf cries. It just leaves you looking like a bunch of schoolyard mud-slingers.
“The problem is that they can’t join the dots enough,” said Key in the House this week. He was swatting away questions on the John Banks donations controversy (another gift from the Dotcom pinata), but he might easily have been analysing his opponents’ strategic shortcomings.
Because the dots are pretty joinable, if you think about it. A large part of the appeal of National and its jocular leader, Barbecue John, has been the contrast with what came before. … [emphasis added]

Now, have things moved on for ‘Barbecue John’ and his Labour Opposition from there? Well, yes, that seems indisputable.

A political observer of Bryce Edwards’ calibre seems perfectly entitled to express his view of things this morning: the “most appalling political management since he became Prime Minister back in 2008” even if that offends Mr Key’s enthusiastic tribalists, apologists and spin doctors, paid or unpaid.

Personally, I thought Mr Key’s reaction to the pre-election Tea Pot tape recording — sending the police with search warrants into the Herald on Sunday and Radio NZ newsrooms — was less-than-optimum political management too. If anything, as I and others saw it, that’s when the gloss started to come off. See: Losing the shine? Maybe. We’ll see.

Add in the Kim Dotcom ‘memory lapses’ with police and security service botch-ups, and Mr one-vote-majority Key defending the indefensible John Banks and his ‘anonymous’ donations (“I haven’t read the police report. No I don’t intend to”) and I think perhaps it’s possible we’ll observe an erosion of public confidence, just as Bryce Edwards says:

“We’re not about to see any immediate dip in his support or for the Government I don’t think, but it will be very corrosive,” says Dr Edwards.
“This is the Government’s integrity at stake here, and Labour have been running a line for a long time that there’s something dodgy about John Key and it hasn’t really resonated that well until recently. But when you put it together with deals over SkyCity and many other things, it looks like he’s not really very good at process, and that he perhaps does things a bit dodgily behind the scenes.
“I think that will start to resonate with the public.” [emphasis added]

It seems appropriate to repeat myself: Maybe. We’ll see.

See earlier post: John Key is getting a reputation as a liar