« Do your opinions invalidate your reporting? – continued
WE WAS BRUNG UP PROPER! »

The Wall Street Journal reported that Google engineers had developed — and then rolled out — a ‘workaround’ to defeat MY privacy setting in Safari (oh yeah, I take it personally) where I had overtly intended to block third party cookies, viz:

A clear intention to block third parties like advertisers from setting cookies in my browser to track my history. Google found a way to defeat that and used it. Scummy. (Safari OSX)

By JULIA ANGWIN And JENNIFER VALENTINO-DEVRIES

Google Inc. and other advertising companies have been bypassing the privacy settings of millions of people using Apple Inc.’s Web browser on their iPhones and computers—tracking the Web-browsing habits of people who intended for that kind of monitoring to be blocked.

The companies used special computer code that tricks Apple’s Safari Web-browsing software into letting them monitor many users. Safari, the most widely used browser on mobile devices, is designed to block such tracking by default.

Google disabled its code after being contacted by The Wall Street Journal.

That “Google disabled its code …” is followed by this damning comment …

In Google’s case, the findings appeared to contradict some of Google’s own instructions to Safari users on how to avoid tracking. Until recently, one Google site told Safari users they could rely on Safari’s privacy settings to prevent tracking by Google. Google removed that language from the site Tuesday night.

This is, of course, being discussed all over the interwebs, with Google saying it’s been misunderstood. Henry Blodget, ran a bit of defence for the many-tentacled beast search/advertising giant in GOOGLE: The Wall Street Journal Is Full Of Crap—Here’s What That Apple Safari ‘Tracking’ Was Really About but even he, in laying out the ‘facts’, says:

But it’s also no surprise that people are once again stunned by Google’s behavior here. And Google’s statement will not set everyone at ease.
The facts are that:

Given the scrutiny around Google’s power and privacy practices, Google’s decision to do this can charitably be described as tone-deaf. More accurately, it can be described as idiotic. But, as usual, there’s a backstory. 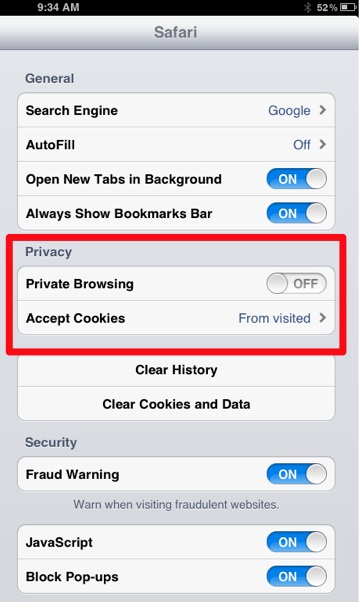 What the hell is Google thinking to design a system to 'workaround' (trick) my specific privacy settings to limit cookies? (Safari iOS settings)

In this case, what Google and others have done sure sounds wrong – if you’ve going to resort to tricking a browser into offering up information designated by default as private, you need to somehow message the user and explain what’s going on. Then again, in the open web, you don’t have to – most browsers let you set cookies by default. In iOS within Safari, perhaps such messaging is technically impossible, I don’t know. But these shenanigans are predictable, given the dynamic of the current food fight between Google, Apple, Facebook, and others. It’s one more example of the sad state of the Internet given the war between the Internet Big Five. And it’s only going to get worse, before, I hope, it gets better again.

John Battelle also mentions Flash — which, truth be told, I was very dubious about when I heard there was such a thing as ‘Flash cookies‘. I downloaded Flush app for OSX to get rid of them periodically *— before following John Gruber’s lead and removing the Flash plug-ins from my computer … relying on the Flash player embedded in Google Chrome (ha! the irony), which quits when I quit Chrome, unlike system-wide Flash, as I understand it.

This move from Google, following their streetview camera cars snooping on private wifi networks and in the context of their soon-to-be-unified ‘privacy policies’ makes me doubt them even more.

I think Google’s intentions are suspect, and I’m moving to a ‘guilty until proven innocent‘ attitude to them. The same view I have of Facebook, incidentally.

As Kashmir Hill puts it:

For me, it’s time to disentangle myself from Google, if possible. They’re doing ‘evil’, in my eyes.

* I just ran Flush and it cleaned out 83 flash cookies. What the hell?