A study in spin. And Farrar lends a hand …

The NZ Herald calls the government’s presentation of proposed teacher cuts dishonest, political humbug and a study in spin.

If the Government were to present the initiative honestly, as cost-cutting, that unfairness would be plain. Instead, it presents it as a commitment to a nebulous notion of quality, which is really so much political humbug. 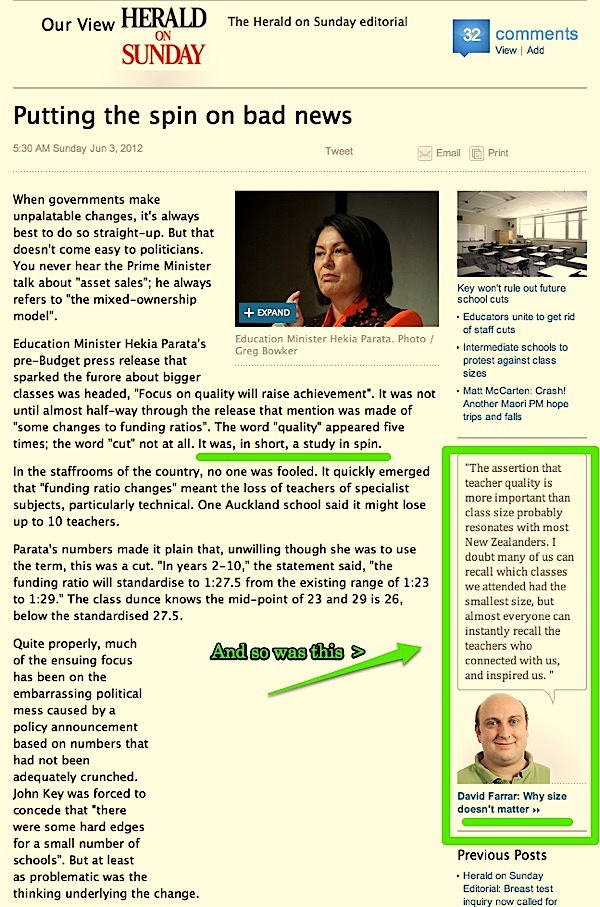 I’m not criticising David Farrar for his (ahem) habit  of always lookin’ on the bright side for his team, nor accusing him of being in lock-step with the National-led government’s spin machine. There’s nothing unseemly about his reliability at spinning for National.

Eventually, it just becomes so obvious. It is tribal.

Likewise, the chorus of condemnation from National partisans, some of whom implausibly attempt to blame a recent poor poll result (TVNZ) ‘directly‘ on Hekia Parata, who I personally think is one of the finest people in their caucus. She is a leader,  with ‘X’ factor … not a Hollow Man.  Reminds me of a comment I read about David Lange: “…a lovely man, far too good for politics.”