When listing achievements, always use the third person … 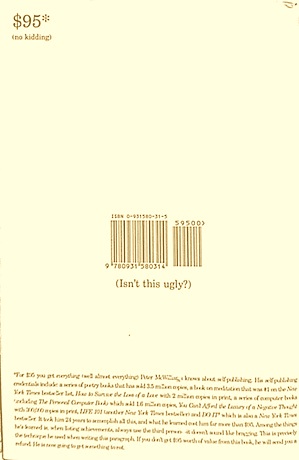 One of my heroes was Peter McWilliams who taught me so much about life in general, and publishing in particular (along with my pal Roger Steele, on both counts).

In 1991, Peter McWilliams published a terrifically practical and instructive book on publishing — Self-Publishing, Self-Taught … which he sold for US$95 — and that price point was one of the first lessons about publishing. I bought a copy in the early 1990s directly from him. It’s one of my treasures.

On the back cover it says…

with the *pointing to text which reads:

“* For $95 you get everything (well almost everything) Peter McWilliams knows about self-publishing. His self-publishing credentials include: a series of poetry books that has sold 3.4 million copies, a book on mediation that was #1 on the New York Times best seller list, How to Survive the Loss of Love with 2 million copies in print, a series of computer books (including The Personal Computer Book) which sold 1.6 million copies, You Can’t Afford the Luxury of Negative Thought with 300,000 copies in print, LIFE 101 (another New York Times best seller) and DO IT which is also a New York Times best seller.
It took him 24 years to accomplish all this, and what he learned cost him far more than $95. Among the things he’s learned is, when listing achievements, always use the third person — it doesn’t sound like bragging. This is precisely the technique he used when writing this paragraph. If you don’t get $95 worth of value from this book, he will send you a refund. He is now going to get something to eat.”

—
That last line, ‘He is now going to get something to eat’ was typical of the playful, self-aware sense of humour (and humility) McWilliams displayed in his writing. He was a wonderful writer and human being and a part of me still mourns his loss.

.
I was reminded of that rule: ‘When listing achievements, always use the third person‘ when I stumbled across this positively gushing biographical ‘blurb’ about travelling salesman and ‘internet marketing’ guru Shaun Stenning (posted BY Shaun Stenning, it says) … on the Hubpages website … funnily enough, on the very same website through which someone mysteriously attempted to fool Google into linking the word s-c-a-m with my name.
Well, what do you know? I thought. Shaun Stenning is a contributor to that very same website! Hmmm…

Anyway, enjoy this, but make sure you’re sitting down in case you fall down — it’s pretty rich (e.g. ‘the seeds of greatness were always there!’): 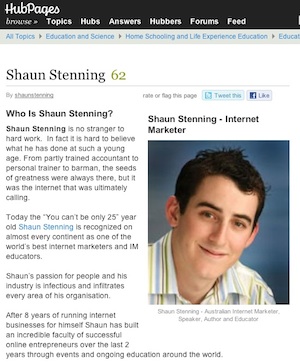 Gee, he sounds WONDERFUL. So why all the complaints and demands for refunds?

Who Is Shaun Stenning?

Shaun Stenning is no stranger to hard work. In fact it is hard to believe what he has done at such a young age. From partly trained accountant to personal trainer to barman, the seeds of greatness were always there, but it was the internet that was ultimately calling.

Today the “You can’t be only 25” year old Shaun Stenning is recognized on almost every continent as one of the world’s best internet marketers and IM educators.

Shaun’s passion for people and his industry is infectious and infiltrates every area of his organisation.

After 8 years of running internet businesses for himself Shaun has built an incredible faculty of successful online entrepreneurs over the last 2 years through events and ongoing education around the world.

First he proved that the internet was a goldmine for himself, then he built systems to help every day, “non-techy” people get great results for themselves.

Online the rules are made to be followed and Shaun understands this more than most. 49 attempts at online businesses failed before he started unlocking some unique keys to success.

To help others follow the rules Shaun has developed support systems that make him the envy of the entire industry. With Shaun’s systems you get 24/7 hand holding in your own language, something no one else in the industry provides. He does this because he genuinely cares about his clients and insists on doing everything he can to maximize your results.

He has retired 3 times already but his passion for the internet keeps bringing him back to his laptop and his love for people keeps him traveling the world turning kids and grandparents into successful online entrepreneurs.

In fact Shaun would say anybody can succeed online and he has now successful clients from some of the poorest nations in the world.

“If you want it you can have it” is something Shaun teaches, believes and proves in his own life and the lives of his clients.

Recently Shaun has built a team of global experts in every area of his business to enable him to be on the road and still bring the most cutting edge opportunities to his clients and ensure that his reputation as the world’s best internet marketer is continually enhanced.

Even his competitors admire his commitment to quality, honesty and creativity. For the best of the best in internet marketing there is only one name, Shaun Stenning.

Oh boy! Exaggerate much, Shaun?
I know some people might think my assertions that these guys are hyperbolic may be a bit overstated. I stand by those claims. This, in my opinion, just proves me right. Crikey!
+
UPDATE; And of course, Peter McWilliams’s guarantee (‘If you don’t get $95 worth of value from this book, he will send you a refund’) seems a lot more straightforward than Shaun Stenning’s Twa.lk & Sni.pr ‘refund policy’ … which is presently the matter of such strident discussion elsewhere on thePaepae.com: ‘Is this how Shaun Stenning handles a request for a refund?‘