Nicky Hager was in Auckland last night, at a public meeting called to give people the opportunity to hear from — and question — the author of Dirty Poltiics, a book the author said is about ethics.

Quite a good turnout (about 350-400) but I was surprised at the absence of MPs (did anyone notice a single MP?) in contrast to the anti-GCSB Bill public meeting last year.

I understand video coverage of the meeting was live-streamed, so eventually there’ll be an archived video of it online. Let me know if you spot it and I’ll link to it here. (UPDATE: see below) I took some notes which I’ll add to this post later. 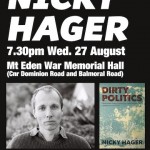 Sir Ted Thomas was excellent and spoke very warmly about Nicky Hager, then offered his analysis (as a retired judge) of the ‘public interest’ justifications for the invasions of privacy which reporting the content gained from the leaked emails, messages etc entailed.

Nicky Hager explained the considerations he took to remove private, non-relevent items from the material, and how he weighed those issues. He described leaking as a ‘safety valve’.

Hager’s talk was earnest and very reasonable in tone, i.e. not rabble-rousing. Just as he does in his book, he encouraged his audience to participate in politics — which he said is NOT the same as dirty politics

Participate in politics. Otherwise we leave the field to the nastiest and most unscrupulous.
Politics is the sum of the actions of everyone involved.
Help build up the news media. Those of you who are bloggers, don’t imitate the attack blogs.
Understand the politics we’re fighting and participate — participation is the antidote.