« Getting your brand into your customers eyes?
When listing achievements, always use the third person … »

Is narcissism the new normal? 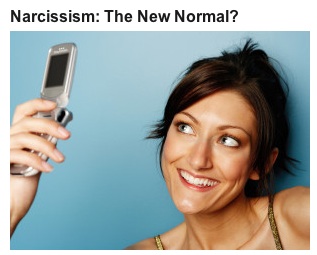 I love the irony in this news.

Apparently an upcoming revision of the psychiatric diagnostic standards manual, the DSM-V, has removed the narcissistic personality disorder from its roster… does that mean it has become so pervasive that it’s no longer thought of as pathological?

Is narcissism the new normal?

Well, maybe it is.

Certainly it would explain why people like this can make such exaggerated and misleading statements and claims about their own legend-in-their-own-lunchbox-style success, achievements and so-called ‘status’.

Read about some of the issues here at Huffington Post in this intriguing article from Judith Acosta.

(PS Is it narcissistic to have a blog?)