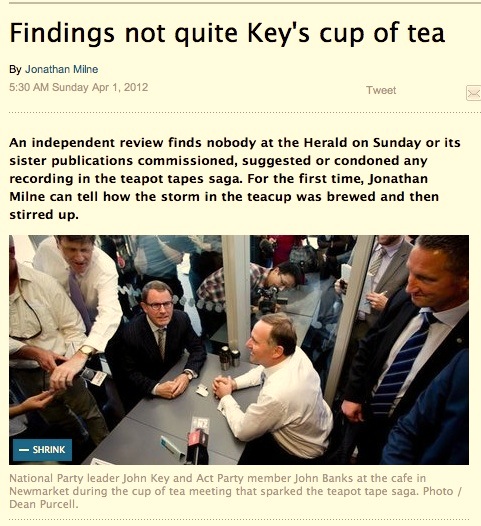 Herald on Sunday journo Jonathan Milne’s narrative of how the ‘cup of tea’ media stunt got recorded and the actions following is a must-read (if you care).

In the same paper, I noted that broadcaster Mike Hosking was quoted declining comment – about controversy regarding his Sky City Casinos contract and payments – to the Herald on Sunday in these terms:

Hosking is still refusing to discuss his close links to the casino, revealed in last week’s Herald on Sunday.
This week he said it was a “non-story” and he wouldn’t be commenting on it as the newspaper’s staff were “pond scum” and “reprobates“.

I know others, including former colleagues of mine, who hold equally unflattering opinions of the HoS — based on their personal experience of the at times, let’s face it, pretty seedy celebrity-hounding, privacy-stretching culture of the paper. (We discussed that here, in relation to the news media stalking people through Facebook, remember?)

But I recommend you read Jonathan Milne’s (NB: not Jonathan Marshall) article for yourself — and see what you think of their actions.