Things that aren’t supposed to be said

Following up on my post the other day about deciphering political codes, highlighting how political campaigns sometimes try to imply the unsayable (like ‘Keep Howick White’) … here’s a fantastic article by Gabriel Sherman in New York Magazine about Fox News supremo Roger Ailes dealing with unstable wunderkind Glenn Beck … which relates to the topic of feeding the undercurrents and sending messages aimed at reinforcing and capitalizing on an aggrieved redneck subconscious. 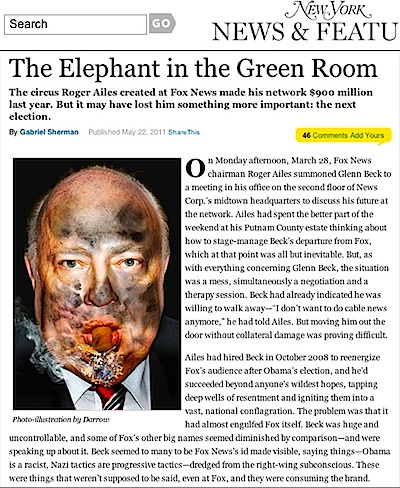 Beck seemed to many to be Fox News’s id made visible, saying things—Obama is a racist, Nazi tactics are progressive tactics—dredged from the right-wing subconscious. These were things that weren’t supposed to be said, even at Fox, and they were consuming the brand. Ailes had built his career by artfully tending the emotional undercurrents of both politics and entertainment, using them to power ratings and political careers; now they were out of his control. …

This stuff is real. Don’t think it it’s not, even in lil ol’ New Zealand. Both right and left wing try to feed and scratch their constituents’ neuroses … but as I pointed out in An insight into sociopaths and liars (also about Roger Ailes/Fox News) often it’s right-wingers who seem to throw off social restraints and say outrageous, unfounded and often personally abusive things (I’m thinking of conservative-bloggers-cum-National-Party-activists here) to get attention, attempting to drive an agenda.

And, sadly, often they get ‘results’ as their targets, seeking to avoid ‘dignifying’ the smear/attack/lies are out-shouted by the echo-chamber.

War is not the only arena where truth is the first casualty.