« Sailing or just being blown?
Shame, not shock »

Obama — a version of America we can identify with

As I mentioned, I’m reading Robert McCrum’s Globish, and really enjoying it.
After digesting a pretty gruelling part of the history of English: 300 years of slavery, the settlement of America, the American Revolutionary War, the Civil War and the ‘end’ of slavery, followed by the bankrupt introduction of Jim Crow laws and segregation, and World Wars, the civil rights movement, McCrum wrote: 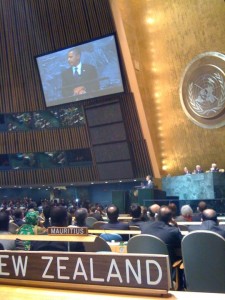 Obama at the UN, September 2010 (photo by Ben Steele) click for bigger

The election of Barack Obama concluded some of the unfinished business of the American Revolution, and also signalled the eloquence of the African-American tradition and its global appeal. … Part of Obama’s extraordinary gift is to crystallise the hopes of his audience, to represent their dreams. So, to young Americans he offers ‘change we can believe in’, to African-Americans, he becomes the symbol of their struggle for recognition; across the world, he embodies a version of America everyone can identify with – even the Irish, who composed a ballad in his honour, claiming a shared inheritance.

… and so on, in an interesting way.

That last point about Obama’s international appeal was echoed in this quote from an article on Bloomberg previewing his appearance this afternoon at a development summit at the UN (where my pal Ben is working):

“I am not sure there is any region where he is not popular,” Vanu Menon, Singapore’s ambassador to the UN, said in an interview. “It’s because the U.S. is seen to be engaging with the world, and the response is positive even if there is not always agreement.”

Yeah, I still breathe a sigh of relief that he’s President.