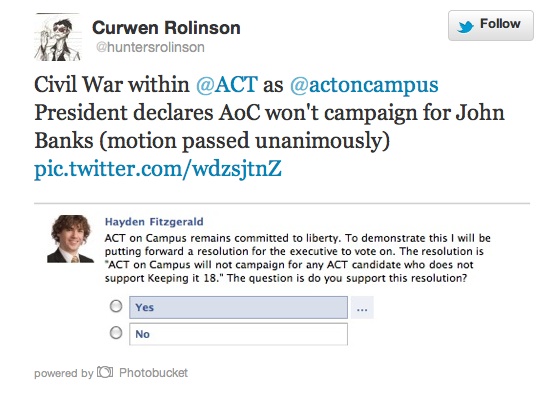 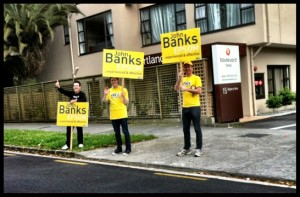 Young ACTOIDS put a lot of effort into John Banks' election campaign effort. How's that working out for you, ACT on Campus? (pic: Peter Aranyi)

(1) Is ACT entering a Winter of Discontent?
(2) Does anyone care? (Zero percent, remember.)

Joan of Arc oops, Cactus Kate seems to think so … apparently exasperated that John Banks isn’t adhering to the ‘principles’ of the ACT Party. (Well, we sort of agree about that, then. But is it just Banks? Or ‘geriatrics’ in the hip young party?)

Enough already.
John Banks won the Epsom seat with the help of his University students called the “Killer Bees”.

He’s now stung them on the arse.

… Yet John Banks, a man who made a fortune in hospitality selling booze to patrons along with their steaks so he could put more money into property developments for more bars, will not support the Keep it 18 campaign.

That’s great John, University students can come help you campaign and you can serve them all orange juice. That will bring in the punters. Rather like a steakhouse without booze. …

In the meantime on behalf of the students all of whom are afraid/shy/spun in your web of silliness [sic] to tell you that you don’t belong in ACT, let me remind you of the principles of the ACT Party, that Nikki Kaye and for heaven’s sake Trevor Mallard and Gareth Hughes seem more capable of understanding

I encourage the remaining members of ACT on Campus to tell John where to stick his righteous, patronising conservatism as it is only going to get worse. Something like this is excellent. If the geriatric 65+ yo members of the party can’t adhere to its written principles then perhaps they need a little reminder.

It’s true about the young Actoids campaigning for Banks (see pre-election pic above).

You had to ask at the time …
Question: How good a fit was John Banks for self-identifying libertarian university students?
Judging by the what’s being said now, Answer: Not a very good one. Surprise me.

Cathy’s ‘You don’t belong in ACT‘ complaint is up there with a teenager I know who accused her parents of ‘sucking all the fun out of my life!’.