When ‘gurus’ attack — HOW you do it is important 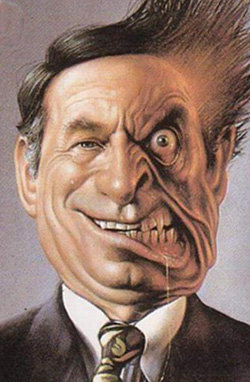 From a review of The Snowball: Warren Buffett and the Business of Life …

It’s full of tips and advice but the one I like best comes from Buffett via Dale Carnegie, author of How To Win Friends and Influence People:

“Criticism is futile, said Carnegie. Rule number one, don’t criticise, condemn or complain.” … “Everybody,” adds Carnegie, “wants attention and admiration. Nobody wants to be criticised. The sweetest sound in the English language is the sound of a person’s own name.”

I was pondering this recently, after I had a brief interchange on discussion forum PropertyTalk along these lines with a poster called Max Percy … and reflected on my own journalist’s ‘nose’ and my penchant for publicly pulling the legs off various spruikers’ hyperbole dressed up as ‘marketing’.

Should we, as the Carnegie quote is often used to suggest, AVOID identifying things that are wrong? Should we launch into song: ‘Accentuate the positive, eliminate the negative …’ ?

Or is it better to call it as you see it, to speak up openly, and, where needed, sound a warning?

… I think that many of the so called property gurus or self proclaimed property experts are fakes or even con men.

That is not to say everyone is that teaches pupils about property and run seminars.

I will attack the industry if and when necessary and expose rorts and snake oil spin/products and seminars, but dislike the practice of publically slagging individuals.
… However while I detested the model I did not publically or privately slag the owners of Blue Chip. To do so in my view would be most unprofessional.

Thanks for your thoughtful comments in this thread Max.

With respect (and this is purely a matter of personal choice) I think it is ESSENTIAL sometimes to name names and be specific about one’s concerns about particular operators — publicly.

Some of the dodgy characters you so rightly identified as con-men are very smooth and easily capable of name-droppping and conning their way towards people’s money. I was prompted to name names when it became apparent that one spruiker in particular was referring to me by name and implying a positive association with me and Empower Education to disarm people.

It was a little but like what Kieran Trass’s latest newsletter/infomercial … describes. Kieran makes that point very well in my opinion. Read it if you haven’t.

Of course, such an approach opens the ‘critic’ up to all manner of retribution, retaliation and smear campaigns, including the anonymous glove puppet attacks I’ve copped here from time to time, not to mention nasty threatening phone calls etc. I’ll say no more.

It takes guts. But sometimes, in my personal view, to allow oneself to be muted or to say nothing in the face of wrongdoing takes a toll … and one later can wish that one had spoken up cogently and plainly earlier instead of giving in to squeamishness.

So, what do you think? Faced with deceit, should one be restrained by a sense of decorum … or should one try to dismantle the poppycock and bullshit that con-artists use to lull their victims into a daze, cobra-like, while vacuuming their wallets or equity?

I was encouraged by a comment recently in a BBC interview with John Podesta, former Clinton chief of staff and Obama administration transition head and lobbyist/government relations honcho. Podesta says he sets out to be an independent even critical voice, and adds this proviso:

I despise the sleazy innuendo, gossip and smear campaigns that some try to deploy against those whom they regard as rivals.

As if to prove my point, just a few days after my comment to Max about critics copping “all manner of retribution, retaliation and smear campaigns”, property spruiker Dean Letfus attempted to undermine the professional credibility of one his critics.

His target: David Whitburn — someone to whom Dean Letfus (or someone in his name) had sent threats of legal threats over an openly critical blog post — threats which I published here for general merriment — and against whom it’s possible he bears a grudge for his straight talk to the news media about the spruiker’s striking U-turn on snake oil US tax liens.

He tried to do it insidiously, but I and others perceived it as a clumsy and transparent attempt at retaliation. It was also combined with spruiking the services of Dean Letfus’s excitable business associate (and fellow Tax Liens ‘convert’?) who has invested ten$ of thou$and$ in marketing and commissions (including some to guess-who) to construct a reputation as a ‘specialist’ in legal structures for NZ property investors.

True to form, Dean Letfus denied it when challenged in these terms:

… discrediting DAvid [sic] was the furthest [sic] thing from my mind. Having worked with him in his Fuzo days I simply found the statement weird as I had never heard him express being a trust lawyer ever and could find no record of it.
It’s also true to say that when I think of a “trust lawyer” I am thinking of a structure specialist rather than just a lawyer.

David doesn’t need me to defend him, so I won’t, but it was instructive to observe (once again) the mealy-mouthed spin this particular spruiker employs. And he accuses others of running an agenda. Ha!