« The sad disintegration of my confidence in Judith Collins
Spin within spin. Laughable. (What? Simon Lusk AGAIN?) »

What is this @3NewsEditor? Pravda?

I was surprised to see 3News ‘back-announce’ a report from the first day of The Greens annual conference last night with a pure propaganda statement from the Prime Minister. 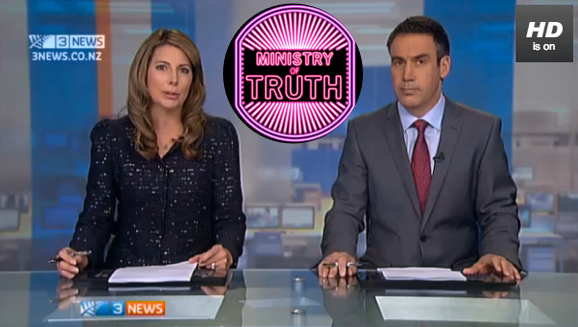 “The Prime Minister has just contacted us …” What the hell?

Whoever was running the newsroom at the weekend made a really odd decision.

Reading Mr Key’s statement — which had nothing whatsoever to do with Russel Norman’s criticisms of National’s [alleged] cronyism (speech notes here) and their [alleged] anti-democratic actions in government — was so ‘off’, so supine, that it made me question 3News’ credibility.

What piss-poor news judgement. (In my opinion.) Way to look like a government lapdog, 3News.

Watch the report Norman accuses government of cronyism at 3News.co.nz and observe (listen below) the completely irrelevant ‘statement from the gummint’ — spin which wouldn’t be out of place in Vladimir Putin’s Russia.

3News gives Prime Minister John Key the last word in a report on The Greens co-leader’s speech attacking the government.

Mr Key’s statement was regurgitated, near-meaningless positioning (spin). 3News’ Carolyn Robinson read it out respectfully like a good little employee of the Ministry of Truth.

What were they thinking?