Ben Uffindell of The Civilian blog is seen as our latest Bright Young Thing of political satire — and rightly so. With his delightful mimicry of the ‘voice’ of news reporting (much like The Onion, although he’ll perhaps be tiring of that comparison) Ben manages to produce satire that is so soaked in verisimilitude that the illusion is on occasions almost perfect.

Look at this example, prompted by the NZ Police’s recent three minute media conference declaring that yes, the GCSB actually did break the law by spying on NZ resident Kim Dotcom, but the government spies didn’t have “sufficient criminal intent” to be charged (!) … and it wasn’t (in the Police’s view) ‘in the public interest’ to prosecute anyone at the GCSB. 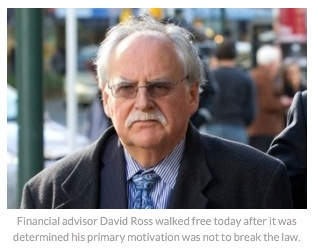 The Wellington District Court has determined this afternoon that 63-year-old financial advisor David Ross won’t be sentenced for running a ponzi scheme that affected over a thousand people, as he did not mean to break the law, and only intended to “take everyone’s money.”

Despite pleading guilty to serious charges of account manipulation brought against him by the Financial Markets Authority and Serious Fraud Office, the court found that Ross only intended to “deliberately misrepresent numerous details about investors in his company with intention of securing investments on false premises, effectively stealing money from clients who unknowingly funded his hedonistic lifestyle of excess,” but at no time expressed any intention to violate New Zealand law. …

Read on at The Civilian