« Self-inflicted wounds
A cost of doing business – celebrity as meat »

There’s no denying Sarah Palin is a talking point

… with her loyal followers even trying to rewrite history amend Wikipedia to back up her hallucinations … (The Telegraph reported it thus: Sarah Palin supporters attempt to change history to help her White House bid)… but suffice to say she’s top of the pops for online chatter. Look: 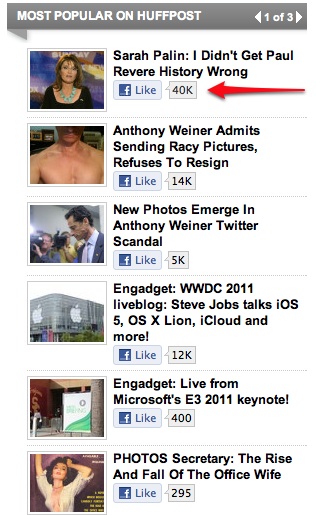 You can’t argue with the fact that she’s got attention. And name recognition is huge in elections. I guess the question is, can she parlay her high ‘lamestream media’ profile, vicarious Facebook ramblings, and motivation-unclear personal appearances into real political influence?

Best joke I saw about her Paul Revere train wreck was a comment on this page FACT WATCH: Sarah Palin’s Twist on Paul Revere:

Palin also said the Civil War started with the assassinat­ion of The Arch Duke of Hazzard.