Look at this. Please click to enlarge and just take a few moments to take it in. I’ll wait. 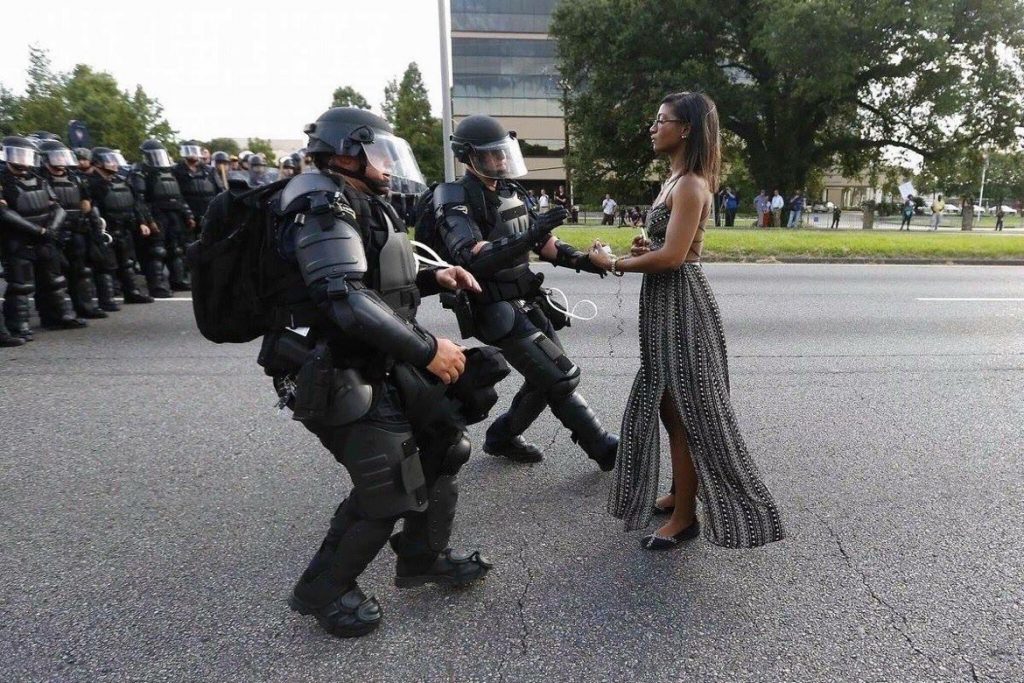 The BBC reports people’s comments about photographer Jonathan Bachman’s powerful, gripping soon-to-be-legendary photograph and he was interviewed on Radio New Zealand’s nine-to-noon show this morning. He sounded like a good man. Saying demonstrators have been trying to tell us what’s been going on for years, but now with cellphones … Listen to the interview yourself at Radio NZ. (Archived as MP3 at The Paepae here.)

Like many others, I saw it first on social media – Twitter in my case – and was stopped by it. Her posture, their protective armour compared to her summer dress. It screams.

What a moment. What an iconic image.

Now read this: Fighting the Future: White Supremacy vs Demography by Eoin Higgins and tell me if you think he’s wrong in any way. Because I can’t find an argument against what he is saying.

It’s July of 2016, and black men are being killed because they threaten the fundamental bedrock of the modern authoritarian racial hegemony in the US: Only whites may be armed, only whites may have authority in society.
Any threat to that shaky premise must be swiftly dealt with. Early on the morning of July 4, an off-duty NYPD officer killed a black man in his car with his family after a road rage incident. Delrawn Small struck the off duty officer during the conflict and the policeman retaliated by shooting him to death. Even off-duty, the policeman refused to accept a threat to white police authority and responded with murder. …

Read on. Warning: it gets worse. So important. (Archived as PDF here.)

Update: some confusion but it seems her name is Ieshia Evans, not Leshia Evans.