« Goodbye Zander. RIP.
What is this @3NewsEditor? Pravda? »

The sad disintegration of my confidence in Judith Collins 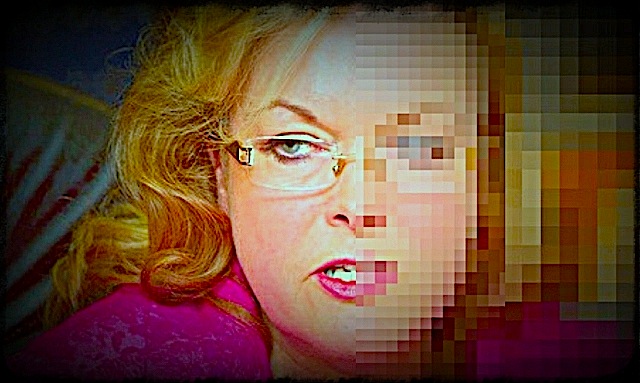 ‘How are the mighty fallen in the midst of the battle!’ — 2 Samuel 1:25. Justice Minister Judith Collins. Image based on a photo by Mark Mitchell/NZ Herald, effects by Peter Aranyi.

Papakura MP Judith Collins sacrificed much of her credibility earlier this month with what I saw as a cynical, self-interested and mealy-mouthed non-explanation for her government’s blocking of MMP reform.

Ms Collins’ smokescreen — her “I’m not their nanny” punchline when justifying her lack of more than token effort or (cough) leadership to formulate legislation aimed at tweaking our electoral laws in the direction of the Commission recommendations — demeans her, and her office. I’ve used that term ‘demeaned’ with respect to Judith Collins before.

I remember my sad realisation when confronted with Ms Collins apparent deceit (Is there a kinder word I could use? Perhaps ‘double-dealing’?) over the Bain compensation report, where I said:

It’s common for politicians to insult our intelligence. We’ve come to expect that. There’s a wonderfully/tragically cynical quote attributed to HL Mencken:

If a politician can hold his job by lying, he will hold it by lying; if lying peters out, he will try to hold it by embracing new truths.

Perhaps I was foolish to expect better of Judith Collins.

But with the best will in the world, one can’t ignore her trail of questionable appointments (e.g. Robert Kee, Susan Devoy, now Jackie Blue) her sidelining of issues that it doesn’t suit her to deal with (Bain), and the recurring theme of ‘self-interest’, viz: 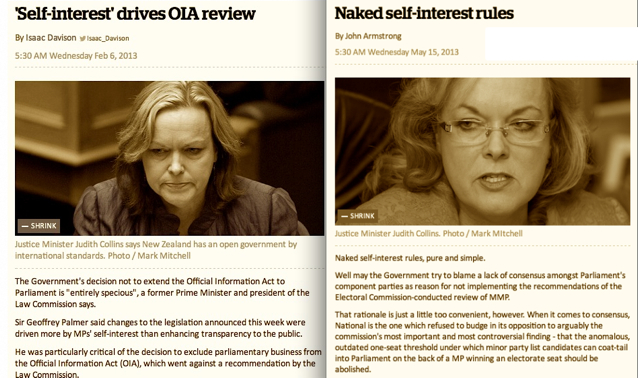 Responding to Labour’s written questions about National MP Ms Blue’s appointment last month, the Justice Minister initially said she didn’t discuss the job with Dr Blue until after October 13. She later changed her answer, saying Dr Blue approached her about the job in September and gave her a CV.

“I agreed to find out whether it was appropriate for a sitting MP to put her name forward and, if I was satisfied, then the CV would be submitted to the ministry,” Ms Collins said.

I don’t personally know Judith Collins. It’s possible I may have overestimated her intelligence as well as her integrity. Or perhaps she’s playing a political game that I, as a mere observer, don’t understand — a long game, using dog-whistles that my ears are not attuned to.

Perhaps it’s a game where the appearance of veracity and consistency to previous commitments and implied standards (e.g. anti-sleaze) isn’t seen as useful or necessary. (Gulp.)

Whatever the case, I live in Maurice Williamson’s neighbouring Pakuranga electorate and not Papakura. Because of that, Judith Collins hasn’t technically lost my vote.