‘…the classic kind of despotic manoeuvre Muldoon would have tried to pull off at his most power-drunk.’

NZ Herald columnist Deborah Hill Cone lets John Key and Steven Joyce have it with both barrels in her piece today: Govt’s event-veto powers in SkyCity deal bizarre relating to a ‘bizarre‘ clause in the just-inked SkyCity convention-centre-for-casino-licence-extension-and-hundreds-of-extra-poker-machines deal with the National-led government. 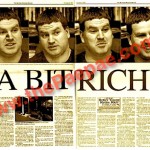 ‘GURU FOR THE UNSOPHISTICATED’

I’m a fan of Hill Cone’s writing, as we have discussed before. When she was writing for The National Business Review, she certainly saw Richmastery spruiker Phil Jones for what he was straight away. (That’s her exposé, right.)

Deborah Hill Cone doesn’t suit all tastes. (So what?) It’s worth reading her whole column. But here’s her [scathing] conclusion, if you’re pressed for time:

Just to recap: the Government did a backroom deal with a private casino operator and is now demanding the right to tell the private operator what events it can run there. Talk about the worst of both worlds. You can’t really blame profit-driven SkyCity for trying to get as much as they can out of the Government in this deal – although it was quite absurd for the major listed corporation to describe itself as being “victimised” by the process, the poor petal.

But you can expect the Government to abide by broad principles of transparency and freedom of expression. Sneer all you like at the left-wing devotion to notions of consultation and hand-holding, but that is starting to sound downright appealing in contrast to the Orwellian arrogance of Big Brother, oops Steven Joyce.

Key and Joyce seem to have started to believe their own hype and think they have a divine cult-like power invested in them which they are entitled to exercise without restraint.

It is the principle throwing aside freedom of expression that disturbs me most, but even in practical terms the censorship clause seems bizarre. What kind of events does National think might be held in the multimillion-dollar convention centre that it needs to scupper: “The Secret Terrorists’ Ball”?

This clause seems one step away from banning the public’s right to gather and protest. This censorship clause is the classic kind of despotic manoeuvre Muldoon would have tried to pull off at his most power-drunk. The domineering subtext to this is “We run this country and you will do as we tell you”. Well, I won’t.

What’s another word for a belief in “a divine cult-like power invested in them which they are entitled to exercise without restraint.” ??