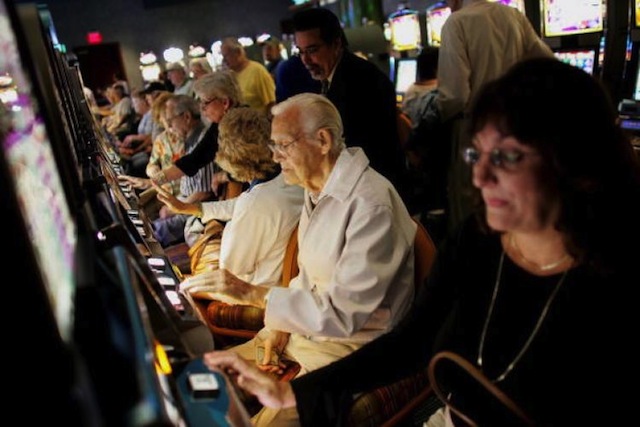 I used to think of gambling as ‘a tax on stupidity’. Now I see it as a cynical & predatory addiction industry. (pic: theepochtimes.com)

Fran O’Sullivan is a smart person. I do sometimes wish she’d be more forthright, however.

Her article ‘Too soon to say if SkyCity deal is buy of the century‘ seems a brave attempt to couch mild criticism of the John Key/Steven Joyce/SkyCity ‘negotiation’ (cough) with a semblance of evenhandedness by dredging up the former Labour government’s 2008 ‘lemon’ buying back Tranzrail from Toll Holdings.

With all due respect to Fran, I didn’t find her comparison particularly compelling — resembling, as it does, shadowboxing. But, hey, her article is still worth a read. See what you think, it’s here.

Fran reinforces her point: that ego-driven politicians who wannadoadeal (and ditch Treasury/economic advice as an unwelcome hand brake) are an expense we taxpayers can’t really afford. That, and her documentation/reference to the shameful deceit (my word. Too strong? Maybe, maybe not) that was deployed by the National-led government against the other so-called bidders or tenderers for the convention centre deal. Fran’s clear that the deal was always SkyCity’s.

The problem is the deal created an uneven playing field and reinforces the impression that the Key Government will opt for backroom deals over due process.

As we’ve discussed before, it seems pretty clear the dubious ‘tender process’ was gerrymandered and shaped for SkyCity, who, I’ve seen reported were at one stage at the bottom of the list of preferred bidders and, (surprise!) ended up ‘winning’ it.

It appears the other so-called ‘bidders’ (scare quotes in Fran’s article) were not much more than window-dressing. The other bidders apparently weren’t told that hundreds of poker machine licences (and what else?) were ‘on the table’ so to speak.

It seems they were, as the old saying goes, treated like mushrooms: Kept in the dark and fed bullshit.

What is also clear is that the four other “bidders” involved in the convention-centre wrangling were sold a pup.
Almost from the start, the deal was SkyCity’s for the taking. The SkyCity board knew exactly what the Government’s bottom line was.
The other companies did not realise they were there simply to add competitive ballast to a so-called expressions of interest process.

Frans’s telling it pretty straight there, I thought, but overall, still kinda doubled-minded. After I read her article I felt dissatisfied, still hungry … so I glanced through the reader comments below and saw this … and wondered how much or any of what ‘Miracle Worker’ says is true?

Amazing coincidences, if they are true. Is that true about “one of John Key’s best friends”?
Or are we that small a country?