« Elizabeth Gilbert: What’s not to love?
The ‘message’ of SHAME »

What the scammers rely on … Believers 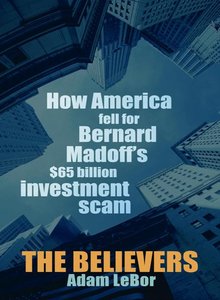 It was in luxurious Palm Beach, by the manicured lawns and Olympic-sized swimming pool, that financier Bernard Madoff ravaged the world of philanthropy and high society he had strived so hard to join, vaporising the assets of charities, foundations and individuals that had trusted him with their funds.

It seems nothing was sacrosanct to Madoff, possibly the greatest con-man in history. Even Elie Wiesel’s foundation has lost tens of millions. But Wiesel was hardly alone in trusting the rogue financier.

How could some of the most sophisticated and worldly people in America fall victim to a collective delusion for year after year? THE BELIEVERS answers these unsettling questions.

It opens up the clubbish world where Madoff operated, tracing the links from Palm Beach and The Hamptons to the salons and clubs of Manhattan society.
It details the network of relationships across which flows hundreds of millions of dollars.

THE BELIEVERS shows how despite material success and acclaim, some human impulses remain eternal.

Yes. I’ve seen that. And without those human impulses to prey on, and people’s willingness to ‘believe’ — to ‘trust’ the oh-so-plausible crooks — the con-artists would have to get an honest job.

In my own limited experience dealing with scam victims, and my interactions with those who would ‘protect’ the plausible-appearing con-men from criticism (let alone exposure!!), I’m often surprised at those who defend them.

Sometimes they vouch for the very people whose actions and misleading or hyperbolic ‘promotion’ has, undeniably, put them and others into financial harm’s way.

The expression ‘drinking the kool-aid’ (a reference to the mass suicide of members and family in Jim Jones’s church-based cult in Guyana) seems sadly appropriate. Sometimes the Believers, like loyal puppy dogs, appear reluctant to behold the plain evidence they’ve been cynically manipulated and shafted.

They would rather stay Believers.

The spell retains its hold…
until the bitter end
which always comes for these con-artists
eventually.
Although they don’t think it will.

It always catches up with them.
The winning streak runs out
eventually.
The lies and half-truths unravel.
Secrets things slip out, or leak out, are dragged out, or are pried out.

However it emerges,
enough of the truth
eventually
stumbles out blinking into the sunlight
to end the con-artist’s charade once and for all.

Sometimes, as in the Madoff case, the con-man himself — seeking a kind of relief — ‘cracks’ and ends it, admitting to his ‘Believers’ that, “Yes, it’s true. It was all a sham.”

The sooner the better, I say.