Sarah Palin … who’s taking who for a ride? 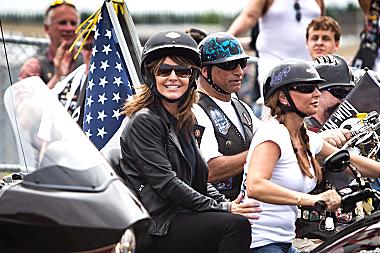 Showing how far good bone structure and a Chance-the-gardener-like ability to reflect back to people their resentments and desire for yesterday's stale and rancid prejudice, Sarah Palin continues her slow dance of the seven veils, will-she-won't-she? campaign for public office. Or fame and riches, it seems more likely. And a gutless press helps her on her way.

This put it nicely.

No one is fooled, really. But the conventions and protocols of “reporting” requires pretending otherwise. Contrary to a lot of our readers, I don’t think the answer is for the media to ignore Palin. Pointing out her ridiculousness doesn’t build her up and doesn’t give her oxygen without which she would disappear, to anticipate two of the most common arguments for not covering Palin. But the traditional standards of journalism don’t allow reporters to tell readers matter of factly what a charlatan and fraud Palin is. That’s considered crossing some bright line between reporting and opinionating when in fact what has been drawn is a unconscionable and indefensible line between reporting and the truth. — ‘Palin’s Historic Bus Tour’ | Talking Points Memo.

What a ridiculous situation where the journos know it’s a farce and her political action committee is nonsense. But an illusion of ‘neutrality’ and ‘balance’ (the same bullshit thought that reduces contentious discussion to gutless ‘he said, she said, but we don’t know who’s right’ stories like this) sees them constantly pull their punches, appearing to take her seriously, breathlessly adding to her ‘gravitas’ until — what? Another series of meltdowns? Oh, but she has so much better political scaffolding around her now.

Sarah Palin and her crew aren’t riding motorcycles, they’re taking the US for a ride — crying/singing about ‘favourite’ Founding Fathers … and god and guns, heritage and traditional values … all the way to the bank.