« Polygamy Porter. Why have just one!
Where Samsung says Apple copied the iPad from … »

Renting ‘The Mentalist’. For credibility? 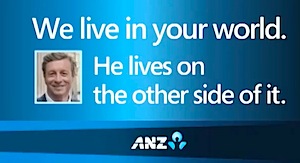 It’s kinda odd, seeing and hearing him spruiking for the bank in character, but oh well.

There’s been a small amount of backlash to the ads in Australia as reported by Jeremy Helligar at The Faster Times (tinkling the teacups, mate) — not over the obvious cash-in and use of a character from a popular show … but because (Aussie-Aussie-Aussie…!) Simon Barker is depicted speaking in Australia, in an American accent… in character for Patrick Jane.

Watch this spoof/social commentary (video below) … and ask yourself: Would Brit actor Hugh Laurie front ads in the UK as American doctor Gregory House? I don’t think so.