« What you see depends on where you stand
Inside joke: Pete says creepy things » 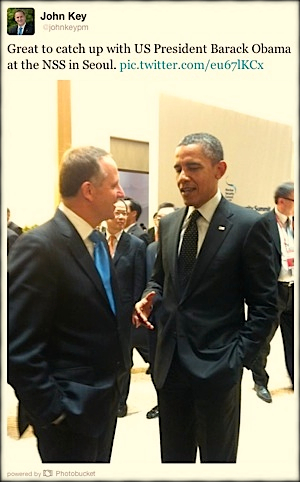 Every now and then John Key does something to remind us that he’s a regular(ish) kiwi bloke. 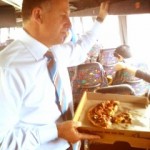 I remember TV3’s Patrick Gower tweeted a pic of the National Party leader on the campaign trail — offering pizza to members of the media stuck on his campaign bus the day before last year’s general election.

Waiting for my coffee at our local café this afternoon, I idly flicked through the NZ Herald and read that the prime minister had tweeted a photo of himself with US President Obama. (See Key Tweet home pal Obama [sic].) Oh, neh, I thought. Surely not!

Well, shucks, folks. It appears to be true. Bwhahahaha. (Blush.)

Now, to be fair, I don’t know that the PM actually tweets himself or whether he has one of his helpers like the effervescent Sarah Boyle do the donkey work … but to quote McPhail and Gadsby: ‘Jeez, Wayne!’

Q: Do you think Obama tweeted a picture of the two of them? It seems unlikely.