Reading between the lines

These aren’t exactly the actions of an ally, now are they?: 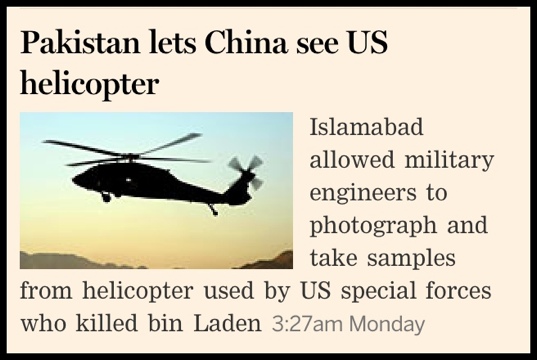 (from the Financial Times)

“The US now has information that Pakistan, particularly the ISI, gave access to the Chinese military to the downed helicopter in Abbottabad,” said one person in intelligence circles, referring to the Pakistani spy agency. The Chinese engineers were allowed to survey the wreckage and take photographs of it, as well as take samples of the special “stealth” skin that allowed the American team to enter Pakistan undetected by radar, he said.
President Barack Obama’s national security council had been discussing this incident and trying to decide how to respond. A senior official said the situation “doesn’t make us happy”, but that the administration had little recourse.

Kinda sorta an indicator that Pakistan wasn’t all that happy about the ‘unauthorised’ US incursion into the country to kill Osama bin Laden. … they’ve let Chinese engineers take samples of the Black Hawk stealth helicopter which crashed during the mission.