‘public interest’ vs ‘the issues that matter’ 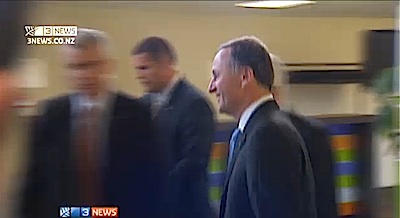 Exit, stage right. A case of ‘If you can’t stand the heat, get out of the kitchen?’

Reflecting on John Key’s clearly-scripted talking point before he ‘stormed out’ of a media conference yesterday, it seems to me the National Party spin doctors (and lawyers?) will be emphatic that their man Key NOT under any circumstances admit to any ‘public interest’ in the cup of tea tapes. Thus, the apparent attempt to smother the issue with what amount to repeated slogans about what — in the beleaguered National Party leader’s view — the New Zealand public regard as ‘important issues’. Having at first promised to ‘take all those [tea tape] questions at the end’ of the media conference, John Key apparently shiftily broke his word (another ‘dynamic environment’, Mr Key?) and abrubtly left the podium. But before that — and more significantly — listen to how he studiously steps around the trapdoor 3News’s Duncan Garner invites him to hover over: 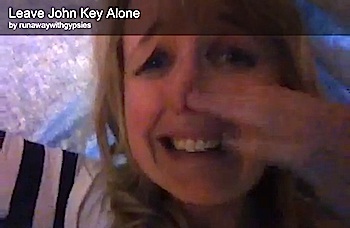 What’s a political leader to do? Dodge the question? Ask to be ‘left alone’? Not a good look. I don’t think the ‘tea tape’ questions will stop, and, as I said earlier, the release of the recording or transcript seems inevitable. One thing is for sure: ‘enemies’ are being made right now. The National Party will not forget which media actors and organisations are twisting the knife in their beloved leader now by not taking the hint and ‘moving on’. Mark my words.