« Wow. A rocket landing
Apparently this choir boy and his glove puppet are being sued for defamation »

On arrogance and credulity

One of these two head bangers infringes the privacy of people to attack them. Oh, hang on – they BOTH do. (Pic: Rachel Glucina)

I’ve had cause to think about privacy issues recently, and situations where people and organisations can fairly be said to have ‘interfered’ with someone’s privacy (well, mine, in fact, but that’s a story for later).

Today I stumbled across a 2012 non-apology letter from then Social Development Minister Paula Bennett who faced an adverse finding from the Human Rights Commission over her release of a citizen’s private information. Ms Bennett had responded to criticism of government policy relating to social welfare beneficiaries by releasing personal information about one of the critics. Nasty.

It’s the same twisted ‘defence’ that the macho men in leadership of the Ports of Auckland company used to justify their release – to sleazy PR attack blogger Cameron Slater – of clearly private information about a striking port worker whose interview on a picket line had been broadcast on Morning Report. See: Worker’s privacy ‘undoubtedly’ breached – NZ Herald. That ethical breach was settled quietly, later.

But in Ms Bennett’s case, her arrogance (that’s how it looks to me) in refusing to accept the Commission’s finding that she was ‘wrong’ to breach the citizen’ privacy was even uglier.

Here’s the relevant section of her Clayton’s apology letter (below) and you can read the letter in full as a PDF here. 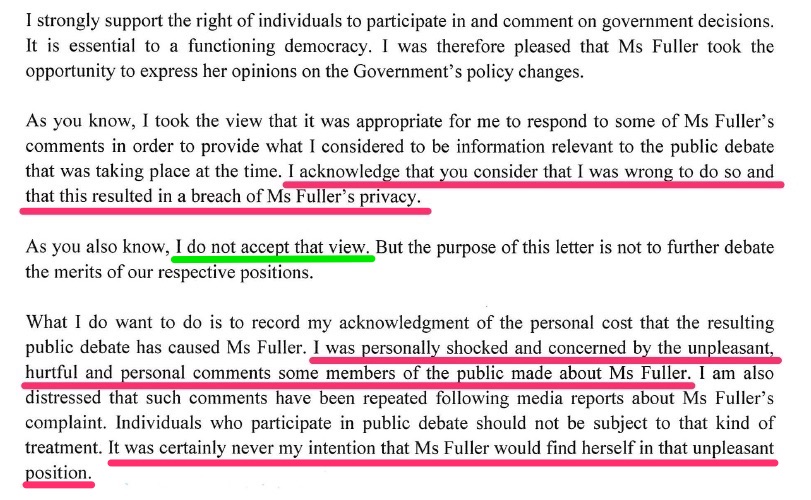 “I do not accept that view” effectively: Your stinkin’ rules don’t apply to me. In my view, Paula Bennett set an appalling example as a legislator and community role model.  (click to enlarge)

To say I am unimpressed is an understatement.

The fact that a ranking cabinet minister (and, depending on who you talk to, National Party leadership prospect)  was ‘allowed’ to thumb her nose at the ‘rules’ and conventions around privacy speaks of an arrogance that frankly demeans the office. Sooo, the rules only apply to the little people? Is that it, Ms Bennett?

You may see it differently, but to me Paula Bennett’s crocodile tears-like expression of ‘distress’ and claim that she hadn’t intended for the citizen to come under attack in ‘public debate’ and that ‘It was certainly never my intention…’  well, you get the picture … meh. I find all that a stretch.

So, forgive me for seeing some of Ms Bennett’s recent statements in her role – statements that stretch credulity, and prompt people to ask ‘Does she seriously expect us to believe that?’ – in the context of this arrogant ‘rules-don’t-apply-to-me’ display from the recent past.

Yeah, nah. Sorry. Not buying it.