No wonder tobacco co.s are SQUEALING …

I follow a guy on Twitter who seems to be an apologist or spin doctor (paid or unpaid, I don’t know) for tobacco interests. This self-described ‘Public Affairs and Issues Management Specialist’ has been salting his tweets with messages baiting anti smoking groups like ASH (are they listening? Dunno) and filling the echo chamber with this-is-the-end-of-civilisation-as-we-know-it type fear and loathing or oh-my-god-don’t you-understand-this-is-about-freedom? alarm messages* — all, it seems, prompted by the ‘plain packaging’ legislation being slowly introduced in Australia. We already have similar laws in New Zealand (since 2008) although still with some manufacturer branding. See images below. 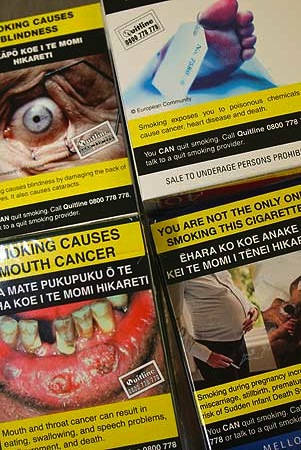 I read today that Philip Morris has filed a lawsuit seeking to block the Australian ‘plain packaging’ legislation. They claim a move to ban cigarette makers from printing their logos, promotional text or colorful images on cigarette packs, and instead feature large health warnings and full-color images of the possible ill-health consequences of smoking violates their intellectual property! Pfah! Huffington Post:

Hong Kong-based Philip Morris Asia Limited, which owns the Australian affiliate Philip Morris Limited, filed a notice of claim on Monday arguing the legislation violates a bilateral investment treaty between Australia and Hong Kong.
The tobacco company says the treaty protects companies’ property, including intellectual property such as trademarks. The plain packaging proposal severely diminishes the value of the company’s trademark, Edwards said.
“Our brands are really one of the absolute key valuable assets that we have as a company – it’s what helps us compete, it’s what enables us to distinguish our products,” Edwards said. “This move … would essentially amount to confiscation of our brand in Australia.” 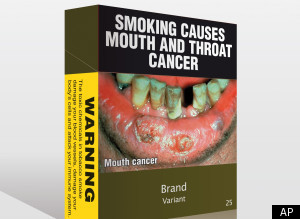 Ew. What an Australian packet could look like. The Tobacco companies say they're outraged their LOGO & colourful BRANDING isn't allowed on the packet. Diddums. (Photo: AP)

Oh dear. Let’s face it: Tobacco consumption kills and maims people. Is there really any doubt about that in 2011?  Faced with the bill for the ill-health and destruction the distribution of tobacco products cause, the Australian government wants to reduce that harm, and (like the NZ government) has progressively banned smoking inside public bars, theatres etc. and reduced the marketing avenues for this special-case death-inducing product — this legal (for now) addictive toxin — the end of sports sponsorships, billboards, role-model advertising or attractive healthy young skinny people in ads …

It seems the tobacco industry will clutch at every last straw* as it drowns inch by inch in the first world, while at the same time, apparently, setting out to conquer fresh green pastures in the third world where it can peddle its poisons untrammelled.

Get rid of them.

* Like this: “If passed, this law threatens free market principles and amounts to a government seizure of what is often a company’s most valuable asset – its trademark,” said ALEC’s International Relations Task Force Director Karla Jones. “The law is alarming because it is inconsistent with Australia’s obligations in several international agreements to which Australia is a signatory.  ALEC fervently hopes that Australia will re-evaluate this misguided policy before it spreads.” — American Legislative Exchange Council.  Good grief.

Disclosure: I have had several close relatives who have died from the effects of cigarette smoking — notwithstanding generations of obfuscation and denial by tobacco companies and their crooked professionally one-eyed researchers and marketers. Theirs is a simply unethical business, in my view, akin to drug-pushing. When used in accordance with the manufacturers’ instructions, the product causes death. (Why is that even legal?)