« Is this what we want?
Background of the Waitangi Tribunal » 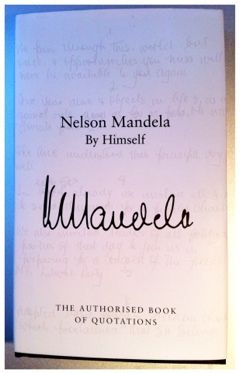 One of my very generous sisters-in-law gave me a volume of Nelson Mandela quotations for Christmas. It’s astonishing how much wisdom about the big issues of life he expressed over the years — and with such eloquence and elegance of thought.

Thinking about the decades of protest at Waitangi, and the enormous progress towards reconciliation we’ve made in New Zealand (still some way to go) I wondered what a freedom fighter who overthrew a government and became a democratic president might say … and found this:

Protest, or the ‘right to rebellion’ against what you judge to be tyranny is essential to freedom. And yet we have people in this country trying, still trying, to suppress protest, bleating about pandering to ‘radicals’.

There’s another quote from National Reconciliation Day (what a concept!) 16 December 1995:

Reconciliation means working together to correct the legacy of past injustice.

It’s up to each of us New Zealanders to decide whether we’re part of the solution … or, by impatient, intolerant vituperation of those with whom we disagree, we prove to be part of the problem.

It’s not easy, but, as Mandela told Parliament in Cape Town 25 February 1999, it’s vital to press through ‘difficult negotiations’.

The quest for reconciliation was the spur that gave life to our difficult negotiations process and the agreements that emerged from it.

Some of those from all political corners in this country know exactly what he means. And to their credit, the leaders among them pursued just Waitangi Treaty settlements from exactly that drive — overruling, if not ignoring the jeering cavils and complaints of those who tried (and still try) to hold them back with hateful objections … and insults.