From the New York TImes: 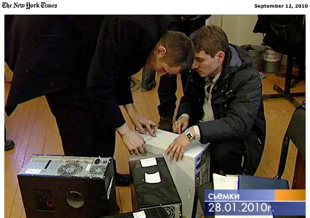 IRKUTSK, Russia — It was late one afternoon in January when a squad of plainclothes police officers arrived at the headquarters of a prominent environmental group here.

They brushed past the staff with barely a word and instead set upon the computers before carting them away. Taken were files that chronicled a generation’s worth of efforts to protect the Siberian wilderness.

The group, Baikal Environmental Wave, was organizing protests against Prime Minister Vladimir V. Putin’s decision to reopen a paper factory that had polluted nearby Lake Baikal, a natural wonder that by some estimates holds 20 percent of the world’s fresh water.

Instead, the group fell victim to one of the authorities’ newest tactics for quelling dissent: confiscating computers under the pretext of searching for pirated Microsoft software.

Across Russia, the security services have carried out dozens of similar raids against outspoken advocacy groups or opposition newspapers in recent years. Security officials say the inquiries reflect their concern about software piracy, which is rampant in Russia. Yet they rarely if ever carry out raids against advocacy groups or news organizations that back the government.

Read on at NYTimes.com

Basically, stealing the tools of the trade and archives on a pretext. Nasty and devious.
+
UPDATE 14/9/10

Microsoft condemns use of anti-piracy laws to stifle dissent

WASHINGTON – US software giant Microsoft has expressed concern over a report that anti-software piracy laws were being used to stifle dissent in Russia and announced steps to try to halt the practice.

The Microsoft statement followed a report in The New York Times that the Russian authorities had used piracy charges concerning Microsoft software to confiscate computers and harass non-governmental organisations (NGOs).

“Whatever the circumstances of the particular cases the New York Times described, we want to be clear that we unequivocally abhor any attempt to leverage intellectual property rights to stifle political advocacy or pursue improper personal gain,” Smith said.

“We are moving swiftly to seek to remove any incentive or ability to engage in such behaviour,” he said. Read on at nzherald.co.nz