« On a collision course
Head on a spike » 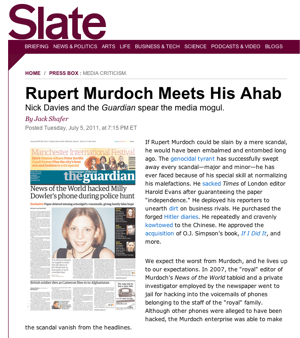 At the risk of being perceived as a mere echo chamber, I really recommend you read these articles. (click)

Wow, read this piece after my own heart:  Rupert Murdoch Meets His Ahab by Jack Shafer in Slate. Brilliant. First words:

If Rupert Murdoch could be slain by a mere scandal, he would have been embalmed and entombed long ago. The genocidal tyrant has successfully swept away every scandal—major and minor—he has ever faced because of his special skill at normalizing his malefactions. …

And do follow his link to 3 minutes audio of Hugh Grant on BBC radio … describing the past editors of News of the World as “the worst editors in the history of journalism—or liars.”