I stayed out of a spitting contest on Twitter where a couple of imprudently timed tweets by Matthew Hooton anticipating an electoral contest in Parekura Horomia’s seat, now that he’s died, sparked a tide of abuse. (Just shows a spin doctor/PR supremo like Matthew can mis-step, too.) 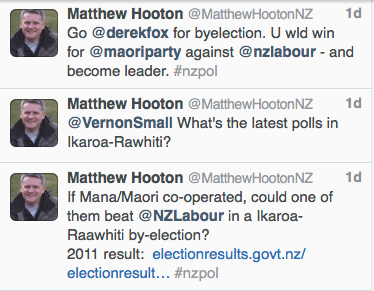 Now, Matthew is perfectly entitled to try to start whatever conversation he likes about whom/whatever he likes, whenever he likes. But Twitter is public, and perhaps he didn’t fully realize the ramifications of that. (Or doesn’t care?) Personally, I think no less of him for those tweets. Matthew wasn’t addressing Mr Horomia’s death. He was talking about something else.

A local comedian whom I quite like, Jeremy Elwood, smacked back at Matthew (who took no further part in the ‘debate’ which followed).

Elwood’s was one of 18 replies and a twitter-storm flared. As they do. (Still not ‘news’ IMO.) I enjoyed Cathy Odgers’ fairly prompt ‘apology’/explanation on Matthew’s behalf: “Too much food colouring today”.

Also classic, but in not such a fun way, was how right wing bully boy/National Party proxy Cameron Slater climbed in. Cameron bought a ticket to fully display his febrile tribalism. ‘The left are so sanctimonious’ — is virtually a self-parodying remark, if you possess the self-awareness to perceive it. Which he doesn’t seem to.

Actually, it’s tempting to see everything Cameron does now as an addict’s desperate urge to feed his habit. In his case, the need for clicks. The textspeak abbreviation ‘smh’ (shake my head) applies more and more as I occasionally navigate across to whaleoil.co.nz and witness his slobbering hunger for clicks, even recently posting speculation about a forthcoming iPhone model(!)

Anyway, on a mission from god, Cameron set out to highlight what he saw as ‘hypocrisy’ displayed by ‘the left’ given Elwood’s previous public (twitter) less-than-flattering comments on Margaret Thatcher’s death. Things got ugly, even by Cameron’s standards, as he foamed up his mostly-anonymous hate ‘army’ on his hate blog. And also on David Farrar’s echo-chamber tag-team wrestling blogsite too. (groan)

But mob-hate only knows one speed, so nasty, trenchant, ugly, untrue things (incited by Cameron’s spluttering faux-outrage) naturally arrived and were published on Cameron’s website — think of the page-views! — requiring a burst of censorship ‘hosing down’ by Cameron and his usually pretty lax Moderators.

It all went nowhere, with Cameron claiming (as he has before) that his large audience somehow means his poo doesn’t smell. This comment from David Fisher (whom I follow on Twitter) summed it up:

@DFisherJourno: Spat between @JeremyElwood and @whaleoil – explosive bluster deflected by comedian until Slater declares victory cos he has lots of readers.

Update: All that said, this low-key comment from David Farrar was spot on:

@dpfdpf: @DFisherJourno @JeremyElwood The issue is you don’t call someone out for being merely insenstive, when you gloat over someone dying #simple

As for the issue of the ‘appropriate’ way to grieve for the death of a public figure, I tried to say in my post about Judith Collins being inspired by her hero Margaret Thatcher: Such things are personal, so just leave people alone.

Juli Weiner, writing in Vanity Fair in a different context recently, addresses the problem when people are perceived as ‘not grieving in The Right Way’ or seem (to us) ‘callous about catastrophe’ this way, which I think is perfect:

Mourning is a very private matter — but when we grieve for public figures, the forms and means of our grief become public, too. This can, and usually does, lead to trouble.

Yes, it is. So let’s cut each other some slack, huh?

Juli Weiner’s article is very good. Read it in full here: Why Mad Men Got the Martin Luther King Jr. Assassination So Very Right (and Why The Newsroom Would Have Failed)