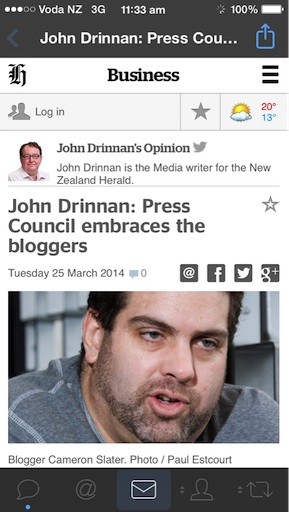 More discussion on the Press Council move to embrace new media … with a few different points of view — including a sound bite of my own.

The NZ Herald‘s media columnist John Drinnan, I think, ‘gets’ the distinction between blogging as self-expression/discussion/current affairs and ‘blogging’ as a dirty, abusive, weaponised PR campaign … which we’ve discussed here a bit now and then.

The question for many is whether treating blogs under the same rules as newspapers will make blogs more careful or diminish the stature of traditional media. Even among bloggers like Peter Aranyi there are concerns,
Some bloggers seeking legitimisation as ‘news media’ …through membership of the Press Council – should more properly be applying for membership of the Public Relations Institute, said Aranyi who has written a lot about a culture of attacks in some blogs.

Let me expand on those thoughts of mine …

Some bloggers seeking legitimisation as ‘news media’ — perhaps, later this year, through membership of the Press Council — should more properly be applying for membership of the Public Relations Institute. That would be a more honest umbrella for their activities. But even there, members are required to be honest, ‘accurate and truthful’ in their endeavours on behalf of their clients.

Honesty
We are accurate and truthful in advancing the interests of those we represent and in communicating with the public.

from PRINZ Code of Ethics (PDF)

Anyone can blog. That’s freedom of speech. But clearly not every ‘new media’ enterprise is a ‘news medium’ — not by a long chalk. It’s pretty clear that some blogs and bloggers take their partisanship to a highly personal level.

Some run political and business vendettas, and engage in ongoing abusive public campaigns to unfairly denigrate or corrode the reputation of others.

In some cases, those activities can be seen to be a commercial enterprise, or in support, or at the service of such enterprises. Cameron Slater’s efforts to demean striking watersiders using personnel files leaked by someone at the Ports of Auckland come to mind.

One might think bringing the online cowboys under the Press Council, with its complaints system and standards for ‘accuracy’ would be a good thing.

Well, maybe. But, as the target of a particularly nasty online campaign wrote last year: Some of them are no more journalists than they are brain surgeons. (see: Target of Cameron Slater’s ‘campaign’ speaks up)