« Big Bang Theory flash mob
‘As playful as he is psychotic’ »

Lying for a living — part of an ugly cosmology

I just had to share this: Delusion? or Audacity? You decide. Breathless irony from Bill O’Reilly Fox News: 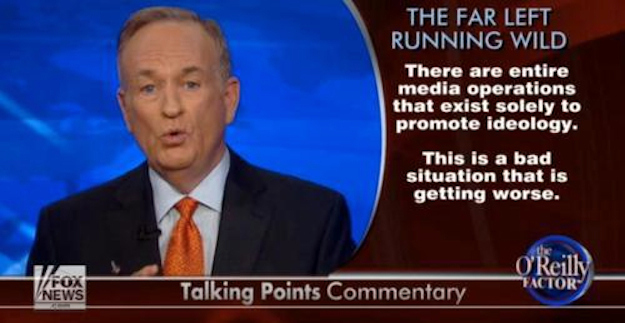 Meanwhile, Ezra Klein, writing in the Washington Post, reacting to Mitt Romney telling his (disappointed) donors and backers that President Obama beat him in the election because he gave “gifts” to a wide sector of the electorate, describes the us and them, worthy/unworthy dichotomy we discuss here at The Paepae from time to time.

From the 47% to ‘gifts’: Mitt Romney’s ugly vision of politics

The last time Romney’s comments to his donors leaked, he was telling them about the 47 percent of Americans who don’t pay taxes, refuse to take responsibility for their lives, and will support Obama come hell or high water. These new comments are continuous with those: Romney really does appear to believe that there’s a significant portion of the electorate that’s basically comprised of moochers.
That’s Romney’s political cosmology: The Democrats bribe the moochers with health care and green cards. The Republicans try to free the makers through tax cuts and deregulation. Politics isn’t a conflict between two reasonable perspectives on how to best encourage growth and high-living standards. It’s a kind of reverse-Marxist clash between those who produce and those who take, and the easiest way to tell one from the other is to see who they vote for.
When Romney thinks he’s behind closed doors and he’s just telling other people like him how politics really works, the picture he paints is so ugly as to be bordering on dystopic. It’s not just about class, but about worth, and legitimacy. His voters are worth something to the economy — they’re producers — and they respond to legitimate appeals about how to best manage the country. The Democrats’ voters are drags on the economy — moochers — and they respond to crass pay-offs.
Romney doesn’t voice these opinions in public. He knows better. But so did the voters. That’s what you see in the overwhelming rejection Romney suffered among African-Americans, Hispanics, Asians, and young voters. They sensed that Romney fundamentally didn’t respect them and their role in the economy, and they were right.

I see this same simple-minded reflexive bigotry expressed in some of the ugly, abusive tripe that passes for political activism-slash-commentary and the tired old phenomenon of media groupthink. Some of the worst, in my opinion, is bundled up with attacks — both honest and dishonest — on trade unionists, academics, scientists, teachers and others thought to be ‘left wing’.

It’s clear that political parties tend to coalesce around “issues” or “interests” or constituencies. That’s understandable. For instance, in the US, as Jonathan Chait mentioned in passing in a good NY Times article GOP Pondering How to Make 47 Percent Not Hate Them

The Republican Party has been organized around defending the material interests of the very rich — largely by defending low top tax rates as its maximal policy goal, but also secondarily through policies like lax regulation of the financial sector and opposition to social spending that would put upward pressure on the tax burden.

Equally, it can be said the Labour movements in the UK and Commonwealth countries had their origins as political actors for the trades unions. Without sliding into a discourse on the blurring of left wing vs right wing poli-economy (Blairite/Third Way/Rogernomics), that division (da bosses vs da workers) remains alive today. Of course it does.

I have no idea if Mitt Romney’s figure of 47% is remotely correct (I think he may have been exaggerating or hallucinating) but the perceptions of division exist, that’s certain, as shown by the closeness of the US election result.

Forward? Via a common enemy?

So the question becomes: is there any path through this division? 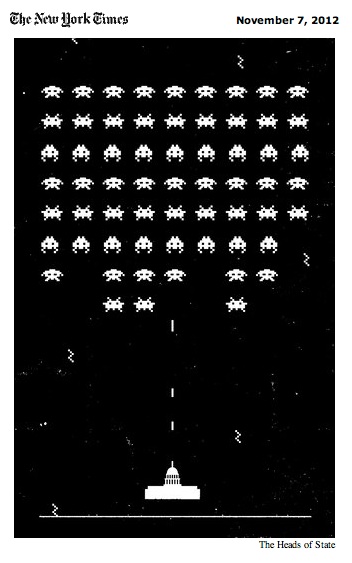 We’ve discussed Johnathan Haidt’s ideas here before. (What a clear thinker he is on the instinctual partisan tribalism which challenges us!) Here’s his response to the Obama re-election (After the Election, Fear is Only Chance of Unity– NY Times). Worth reading.

A basic principle of moral psychology is that “morality binds and blinds.” In many pre-agricultural societies, groups achieved trust and unity by circling around sacred objects. In modern societies, much larger groups bind themselves together by treating certain books, flags, leaders or ideals as sacred and by symbolically circling around them. But if your team circles too fast, you lose the ability to see clearly or think for yourself. You go blind to evidence that contradicts your group’s moral consensus, and you become enraged at teammates who suggest that the other side is not entirely bad (as New Jersey’s governor, Chris Christie, is now finding out).

It’s so easy to hunker down with your team mates and grizzle about ‘the opposition’, to lament and catalogue all the ways ‘The Other Side’ is inferior, undeserving, corrupt, etc etc. As we have seen before in discussions about this, usually that’s a fantasy based on mirage-type effects and selective focus.

But not always. Some ‘players’ are liars. Some tactics are dishonest. Objectively.

Haidt is right that there’s nothing like perceiving a shared threat, a shared enemy, or a war footing — DEFCON 2 and the like — to create a semblance of unity …. or to keep the team (or population?) focused or pliable.

Also: the nature of much political campaign rhetoric (like Romney’s glaring dichotomy: ‘The Government doesn’t create jobs. Vote for me as President and I’ll create jobs‘) leads to a dumbing down, what I call a ‘low mental blood sugar effect’ … which can increase alienation and intolerance, and can make some in the game sensitive to slights, faux outrage and insults … to create an extreme of ‘us and them’ … the Nixonian ‘enemies list’.*

* Only a ‘kill list’ is worse, and President Obama has one of those, too.