« Genius
A trolling we will go … anonymously »

Lucky to get out …

A while ago I was on a mid-winter tour with one of my authors and to end the trip we held a final session in Queenstown — arguably New Zealand’s ski capital.  My events manager and I were booked to fly back to Auckland while our author and his spouse planned to take the ‘scenic route’.

Well, being winter, with snow falling during our workshop, we kept an eye on the airport. An approaching snow storm threatened to close it at any moment. We ended up catching the last flight out before they closed the airport for a few days. My author ended up on a coach plowing through the snow with cars lost in drifts left and right of him. High adventure over mountain roads… 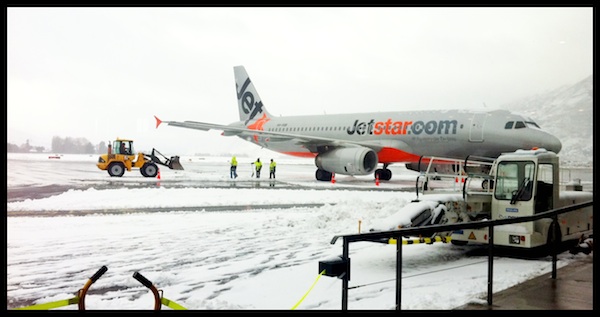 Fast forward to yesterday and a brilliant week-long family ski trip (it’s school holidays) during which we had fabulous weather conditions ended with a chains-on-4WD trip over the Crown Range (Wanaka to Queenstown) and our arrival at the airport for our flight to Auckland to see a Jetstar plane on the snow-blanketed tarmac. (Well, that’s a good sign, we said, not knowing it was a Christchurch flight  stranded from the night before.)

A departures board lit up with ‘Cancelled’ except for our flight with the encouraging ‘Delayed’ motif … after all, there was a plane there, and they could bus people to Christchurch (also in snow) but not to subtropical Auckland.

Long story short: A measly five hour delay, no drama, and we were on our way.  I think we were the only flight in or out of Queenstown yesterday.