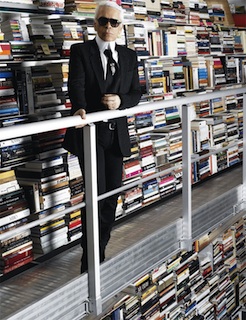 When Vice [Magazine] called me last month with an out-of-the-blue offer to fly to Paris and interview the Kaiser himself, Karl Lagerfeld—creative director of the $10 billion Chanel empire, the house of Fendi, and his own eponymous line—I jumped at the chance. I have to confess that I wasn’t an expert about the fabled fashion kingpin prior to Vice’s proposition, … I was duly excited to meet the Man Behind the Fan (which, I would soon discover, has long since been replaced by the Collar), the guru behind the dark glasses, and to try to separate the myth from the reality.

But having now met and spent time with Mr. Lagerfeld, it seems that, as close as I can figure out, the man really is the myth. It’s not that there isn’t any there there; it’s that somehow, by some strange alchemy, the person who descends the stairway of his fashion house, infinitely multiplied by mirrors, has transcended this mortal coil to become a pure creature of creativity.

Lagerfeld is a study in perpetual motion, tirelessly darting between creative endeavors while devouring both history and the ephemeral present, the zeitgeist. A voracious reader and observer of life through books and popular culture, he filters the world into his couture and other creative outlets like a sort of supercomputer. When I suggest to him in the following interview that he may have Asperger syndrome, a rare form of autism characterized by an obsessive-compulsive “disorder” manifested as a kind of genius, he concurs.

How did you cope with that whole period? I’m sure you knew so many great people who died of AIDS.
I don’t want to go back through that age. In those days it was a hopeless case.

It was a death sentence.
You may be a bit young to remember. It was horrible. Beyond horrible.

It decimated the fashion world.
It killed a whole generation of people.

Which I quite agree with, because it was usually the people who were living really hard and experimenting who got hit with it.
Perhaps things went too far then. But now they want to be too bourgeois.

Exactly. It’s swung back the other way. This bourgeois idea of gays wanting to take on a traditional family life—I just don’t understand it. It’s like the oppressed are becoming the oppressors.
In a way, yes. Exactly.

They want to be the type of people who have always despised them.
When I was a child I asked my mother what homosexuality was about and she said—and this was 100 years ago in Germany and she was very open-minded—‘It’s like hair color. It’s nothing. Some people are blond and some people have dark hair. It’s not a subject.’ This was a very healthy attitude.

You were lucky in that regard.
Some people make drama out of it. I don’t even understand. It’s not a problem. It doesn’t exist. It’s not a subject. For me it never was.”

So … in my view the interviewer is intruding a wee bit — pushing a point of view… but by golly, my hat’s off to him: it’s bloody interesting, and he was on his subject’s wavelength. He’s done a good job.

This subject of how HIV/AIDS decimated the ‘cool’ makes me ponder again how important it is to try to see things from the other point of view, to try to walk in the other person’s shoes.

Elsewhere in the interview, as advertised, Lagerfield ‘confesses’ to probably having Asperger’s … (although the interviewer’s precis is a just bit over-simplified and glamorized, for my own tastes, it doesn’t matter):

Your relationship to technology is kind of interesting.
Well, I hate telephones. I prefer faxes because I like to write.

Who are you faxing? Nobody faxes anymore. You’re like the only person with a fax machine.
People I’m really friendly with have faxes. Anna Wintour has one. We speak via fax. And in Paris I send letters to people.

That’s a lost art.
I have somebody to deliver letters all over every day.

You send a note over.
Yes, I send notes.

That’s very Victorian.
Yes, but there’s not one bit bad about the Victorian. Civilized living for me is like this. I’m not a chambermaid whom you can ring at every moment. Today, you know, most people act like they work at a switchboard in a hotel.

The whole culture of cell phones, texting, and instant messaging is very impersonal and also very distracting.
I’m not working at a switchboard. I have to concentrate on what I’m doing. The few people I have in my telephone are already too much. When I’m on the phone I talk, but I really want to be alone to sketch, to work, and to read. I am reading like a madman because I want to know everything.

I think that you might have Asperger syndrome. Do you know what that is? It’s a kind of autism. It’s like an idiot savant.
That’s exactly what I am. As a child I wanted to be a grown-up. I wanted to know everything—not that I like to talk about it. I hate intellectual conversation with intellectuals because I only care about my opinion, but I like to read very abstract constructions of the mind. It’s very strange.

That’s quite Asperger’s. There’s a boy who’s 20 years old; you can see him on YouTube. He’d never seen Paris from the air before and they flew him over Paris in a helicopter. Then they took him to a studio and he drew the entire city. Building by building, street by street.
I can do that with the antique Greek world.

That’s what I’ve heard.
If I had to make another choice I would have studied languages and antique civilizations.