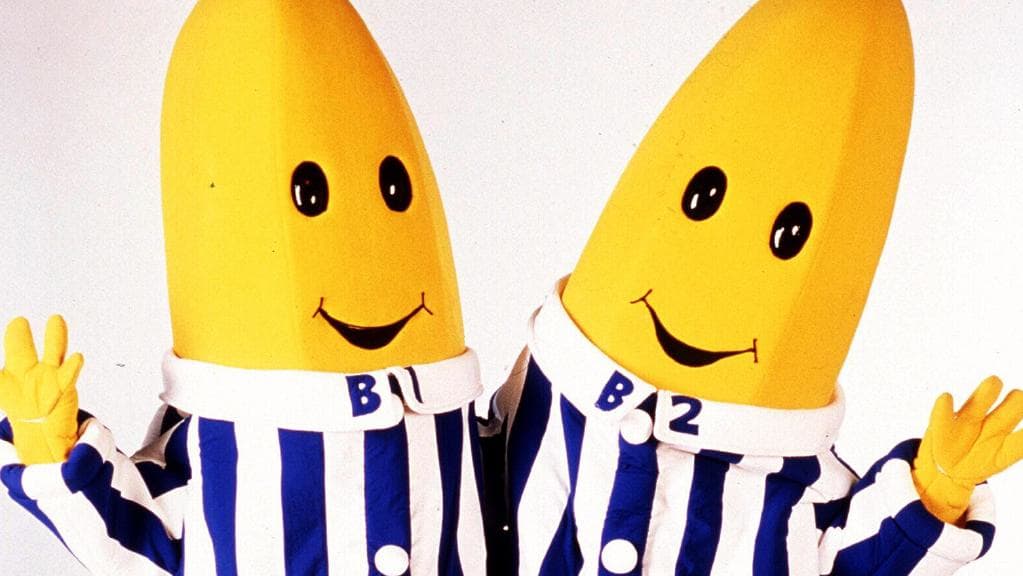 A long running lawsuit between two stupid Auckland men is finally is over.

A long and bitter court feud between former Conservative Party leader Colin Craig and Jordan Williams has been settled, with an apology and compensation from Williams.
On Tuesday, Craig sent out a press release saying he’d received a full apology and a payment from Williams, after Williams admitted making false allegations about him.
It means a retrial of a case in which Williams accused Craig of defamation will not go ahead.

I well remember when our lawyers, Earl and Ben from Simpson Grierson, explained to me and two of my authors that once we had filed our lawsuit alleging copyright infringement – against recidivist plagiarists who had copied large chunks, word-for-word, from several of our books and articles, then published them as their own work –  the lawyers told us we were said to be ‘engaged’ … and we could only ‘disengage’ by agreement with the parties we were suing, or by a court result.

That felt uncomfortable, and as the mounting expense, the stress, and the shitfight of the litigation escalated, it got really uncomfortable. It also took so long for the foaming guilty party to stop their stupid tub-thumping and own up, make an acceptable settlement offer, to pay damages (any of this sound familiar?) The NZ Herald‘s sardonic business reporter Anne Gibson headlined her story on the end of the legal action: ‘Copyright dispute turns into a saga’. Sigh.

So I have an inkling of the stress these two roosters – Colin Craig and Jordan Williams – have been enduring as this legal fiasco/soap opera has ground on – for years and years. Honestly, I’m relieved and glad for both of them, and their loved ones, that this, at least, is over. I know what an unsatisfactory state of affairs this result must be for them both.

And I don’t like how this development has been reported in some quarters, with an implicit criticism of Colin Craig for using every avenue and opportunity available to him to seek to salvage his burned-beyond-all-recognition reputation from the molten ashes created by a deliberate, concerted, (in my personal opinion, based on what I’ve seen) devious and BAD FAITH smear campaign which aimed to destroy him, and decapitate the Conservative Party. 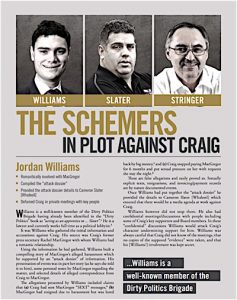 I’ve posted before (see ‘About that Jordan Williams damages award…’) how the Katz, J ruling at the end of the Williams v Slater High Court trial [PDF] effectively shredded right wing astroturf lobbyist and dirty politics apprentice Jordan Williams’ own reputation, mainly by coldly documenting his repeated, proven dishonesty.
Judge Katz, who presided over the long and tortured defamation trial – Williams suing Craig pre-emptively (facing threats of a lawsuit the other way) for mean things said about him at a press conference and in a booklet* – issued a catalogue of Jordan’s lies and his deceit, right there in her court decision. Then there were the claims and allegations that were exposed as false and exaggerated, at which Jordan deployed a defence (paraphrased): I claimed things that were untrue, but I did not lie.

Katz, J also quashed the ludicrous award of $1.27 million ‘damages’ issued to Williams by a sympathetic/gullible/hypnotised jury who seemed to regard Jordan as a poor wee choir boy – and judged that he was somehow more defamed than Michael Stiassny ($825,000 in damages) whose defamer set up a dedicated website to unfairly smear him and (if I recall correctly) leased a fricken motorway billboard to tell Aucklanders and visitors to the region what an [alleged] lying [alleged] crook he [allegedly] was. (Yeah, I did recall it correctly, see Siemer loses defamation appeal in Stiassny case):

The $825,000 is made up of $650,000 general damages, $150,000 aggravated damages and $25,000 exemplary damages.
It was just one ruling in a number of court actions brought by Stiassny against Siemer in an attempt to have the defamatory website material, and a matching billboard, taken down.
Injunctions restraining Siemer from publishing further information and removing the current defamatory statements were ignored and in the end Siemer was jailed for six weeks in July 2007 as well as being fined $15,000 in 2006.
While imprisoned Siemer republished the offending material, earning him a further six-month stint behind bars in July 2008.

Six weeks, then six months in jail? Epic! Colin and Jordan got off lightly! 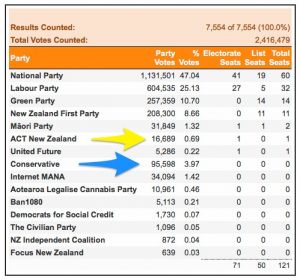 Jordan Williams’ ‘offical’ record of deceit involving the woman at the centre of this whole thing, the Colin Craig Conservative Party’s press secretary whose resignation and its timing – blown up with breathless, wheezy, panting reporting by Barry Soper – basically torpedoed the Conservative Party just ahead of the 2014 general election. (They still got 3.97% of the vote, almost six times the rich-pricks-plaything/Frankenstein’s-monster-on-life-support ACT Party’s vote.) But that was then, this is now. I’m sure it was a complicated situation for all concerned.

Today, reading Colin Craig’s media release (see below) aloud to a couple of mates who are right-leaning voters, they were both outraged – and one of them said: ‘Gee, I would have voted for him, but that for that scandal.’

As disclosed here on The Paepae earlier, personally, I had always, right from the start, seen the nasty, seedy, Dirty Politics-style smear campaign and needling attacks on Colin Craig by Cameron Slater and his young gopher Jordan Williams as a decapitation attack on the Conservative Party.

It was Jordan Williams who was shown to have launched a subterranean campaign to disgrace and destroy Colin Craig. (Judge Katz: “For all intents and purposes he mounted a campaign in the following weeks to remove Mr Craig as Conservative Party leader.”) It was Williams who (um, how can I put this?) exaggerated a great deal about what he knew, what he had seen, what Craig had supposedly done, said, paid, and ‘sexted’.

It later emerged that Jordan Williams had become a ‘support’ person for Ms MacGregor, gaining access to her …files, and then, at one time, he was (apparently) her boyfriend (?). In these erm … roles, according to the court ruling, Williams surreptitiously – and in direct contravention of his pledges to her, and her lawyer (and his own duties as a lawyer, surely?) of confidentiality – copied documents she had given him for ‘safe-keeping’ and provided some of them to Slater for gleeful misinterpretation/publication on his attack blog. Then he commented as a pseudonymous troll (there’s a bit of that about these days, still, eh?) on the blog, racking up the pressure on Craig. What else, private, was going to be released?
He also, according the Katz ruling, gave information from those same confidential documents and made inaccurate claims about them to board members of the Conservative Party, including to board member Christine Rankin who said she trusted Jordan ‘implicitly’ (oh dear) … all it seems, with a goal to remove Colin Craig as leader – to destroy him. 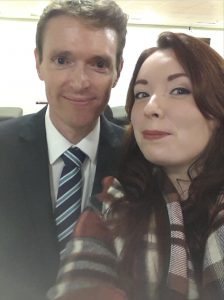 This is my favourite photo of Colin Craig. I don’t think he had any idea who Coley was, but she popped into one of his Wellington electioneering meetings with her now husband, my Twitter buddy Simon, in May 2014; hilariously live-tweeted the event to us; and took this selfie with Craig – which she posted on Twitter. She was (gently) mocking him, but he was good-natured and/or innocent enough to play along.

Now, let’s all admit here, as a given,  that Colin Craig, although a successful businessman, is a bit of an oddball. (More ‘odd’ than other New Zealand politicians I’ve dealt with? Or more odd than, say, me? Hmmm. Both fair questions.)

Craig evidentally doesn’t read social cues well, is a bit gauche, dressed funny, appears to lack empathy, and has a vaguely other-worldly way of looking at things. And looking at a camera.

He’s in no way a simpleton or an idiot, but he’s tone-deaf and has an earnest naivety that is easy for smartarses like me to mock. I don’t know him, I haven’t (as far as I know) met him, and actually have avoided communicating with him for fear of compromising his case with my evident antipathy and record of criticism of the actions of Slater and Williams. But my guess is Craig is probably on the autism spectrum (maybe Asperger’s?), so he’s a very, very literal person, feels ‘injustice’ keenly, and can be like a dog with a bone. He’ll just keep going – way after after people, more sensible people, would stop.

One might observe the same tenacity, resilience and determination in Matthew Blomfield – whose heroic and dogged pursuit of Cameron Slater over Slater’s ghastly and protracted, ill-motivated campaign of defamation (for hire, it seems almost certain) led eventually to the shuttering of the Whaleoil attack blog and Slater’s own slippery voluntary bankruptcy to avoid financial penalty. (Other than his legal costs, and maybe even some of them.) Not to mention the self-pitying distorted reality the attack blogger and his minions tried to spray out like a squid sprays ink as he went down.

Colin Craig, it turned out, was a bad target for Slater and Williams to go after.

Anyone who’s read my previous comments here about Jordan Williams knows I would not trust him to buy my lunch. I said as much in a post ‘Read it and weep. Nicky Hager’s ‘Dirty Politics’:

Based on what’s revealed about Slater/Lusk “apprentice” Jordan Williams in Hager’s book, it’s fair to say I now hold Jordan Williams in utter contempt. I personally will never trust him, nor anything he says or writes, beyond the most trivial without independent verification. These are harsh judgements, I acknowledge that. I don’t say that about many people.

So, sorry, I just don’t buy Jordan’s efforts – even in yesterday’s press release announcing surrender – to sell himself as a knight in shining armour, (a ‘whistleblower’!), or an appalled fellow Conservative Party member out to right wrongs for the sake of the party. Nope. Nuh-uh. No way. You may see it differently. I think fair-minded people can disagree on this point. I mean it.

Here are the media releases from the two parties for you to read for yourself. Obviously they’re both slanted, but if I may just say this: Jordan’s looks to me (personally) like yet another sleazy attempt to paint some virtue onto a wretch, like slathering mayonnaise on a shit sandwich. It’s not really more palatable. In fact, it’s awful to me how Jordan, who tried to portray himself as a noble hero at his trial, here tries to regurgitate some of his shabby attack lines in the statement with his apology. 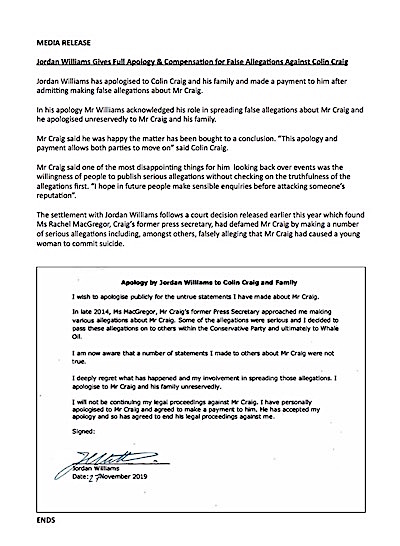 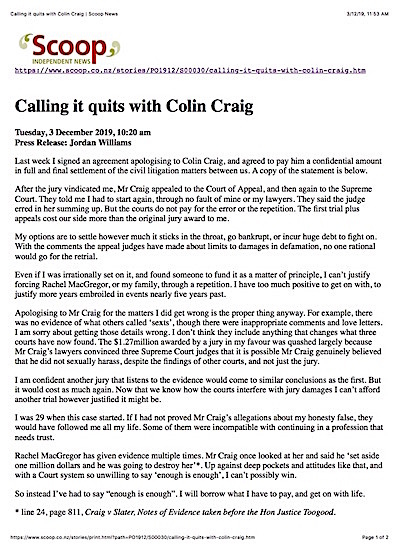 The last point I want to make is this: Shit that was expensive!

Assuming what Williams says about his legal costs is true – a stretch, I know, by my own admonition, one really shouldn’t assume that – but let’s say this statement he made is true:

The first trial plus appeals cost our side more than the original jury award to me.

* regarding the booklet Craig had printed and distributed, now that this case is over, do you think it’ll be republished? (Not that I would do that. I have no need to do that. I’m pretty sure it’s archived on this website somewhere. It’s been such a long time.) 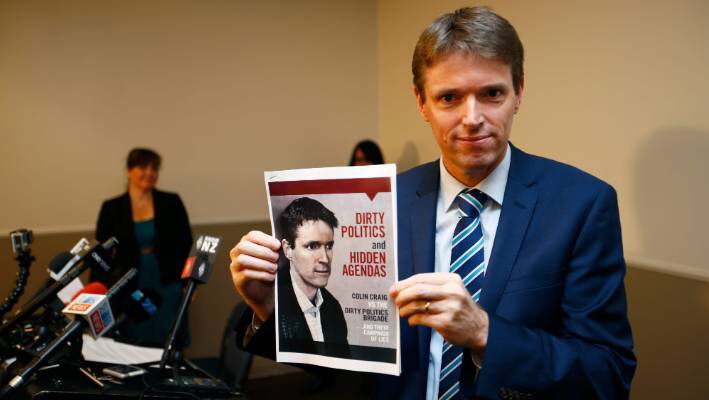 Facts are stated to the best of my knowledge and commentary is my honest opinion. Corrections or clarifications are always welcome by email. Comments are open, but may be moderated. (If you’re currently engaged in litigation with Colin Craig, or you ARE Colin Craig, please tread carefully.)
– Best wishes, Peter Aranyi