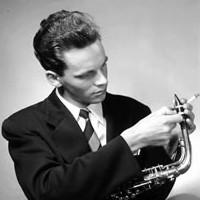 Sir John Dankworth, a mainstay of the British jazz scene for over 60 years, has died.
Saxophonist Sir John, 82, served as musical director to the likes of Nat King Cole and Ella Fitzgerald.
Sir John, known as Johnny, died in a London hospital on Saturday. He had been ill for several months.
His wife, the singer Dame Cleo Laine, announced his death at a concert at their Buckinghamshire theatre, where she was performing with their children.
The concert on Saturday was celebrating 40 years of the theatre, which the couple founded in the grounds of their home in Wavendon.
Dame Cleo broke the news to the artists before the concert began but did not tell the 400-strong audience until the finale. (continues…)

Farewell Johnny. You made a mark. You were the soundtrack of generations.