« She’s a hard road finding the perfect instrument to manipulate the market, son.
Dedicated to no-one in particular … »

John Pilger on the shabby persecution of Julian Assange

I have respected John Pilger since before I trained and entered journalism in the 1980s. I respect his courage and his tenacity, his willingness to show up and tell the truth as he sees it. He’s also no fool.

So, although it may not be a popular stand, in terms of some people’s interpretation of the ‘sex crimes’ kinda sorta alleged that Julian Assange may have possibly committed, I have tended to see him as the victim of a stitch-up. He has been a target of character assassination of the most cynical type. As I said somewhere here, about this: intelligence agencies tell lies for a living.

Documents leaked by NSA whistle blower Edward Snowden led me to ask: ‘Does anyone else think this spy agency ‘Discredit a target’ strategy might have been used against Julian Assange?‘ 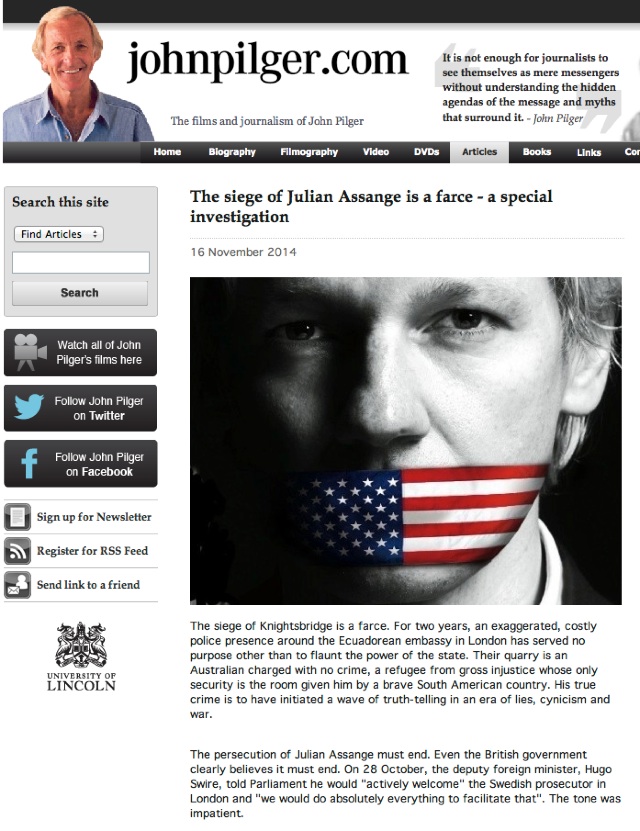 I hope Pilger won’t mind me stealing a little of his thunder by previewing one of his points (emphasis added):

On 18 March 2008, a war on WikiLeaks and Julian Assange was foretold in a secret Pentagon document prepared by the “Cyber Counterintelligence Assessments Branch”. It described a detailed plan to destroy the feeling of “trust” which is WikiLeaks’ “centre of gravity”. This would be achieved with threats of “exposure [and] criminal prosecution”. Silencing and criminalising this rare source of independent journalism was the aim, smear the method. Hell hath no fury like great power scorned.

Assange has been smeared in an effort to neutralise him and his organisation, as I have tried to say pretty consistently. The pity of it is when I see former collaborators in the media used as tools. ‘Useful idiots‘.

Seriously, read the full John Pilger article. I commend it to you.