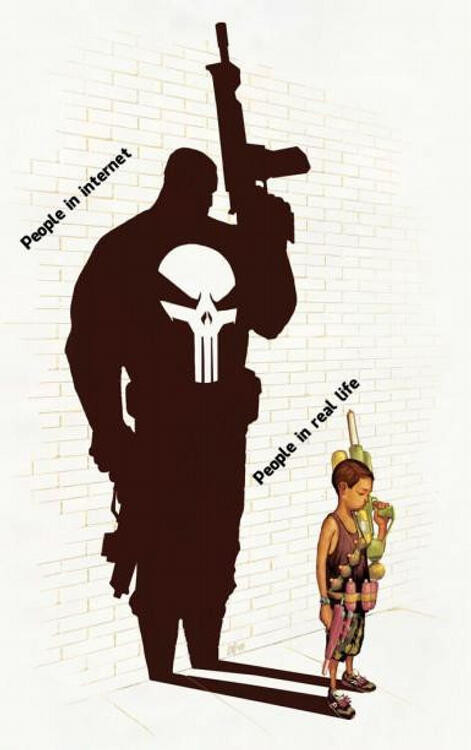 From an article you may have already seen at Slate magazine by Chris Mooney:

Last year, for instance, we learned that by hurling insults and inciting discord in online comment sections, so-called Internet trolls (who are frequently anonymous) have a polarizing effect on audiences, leading to politicization, rather than deeper understanding of scientific topics.
That’s bad, but it’s nothing compared with what a new psychology paper has to say about the personalities of trolls themselves. The research […] sought to directly investigate whether people who engage in trolling are characterized by personality traits that fall in the so-called Dark Tetrad: Machiavellianism (willingness to manipulate and deceive others), narcissism (egotism and self-obsession), psychopathy (the lack of remorse and empathy), and sadism (pleasure in the suffering of others).
It is hard to underplay the results: The study found correlations, sometimes quite significant, between these traits and trolling behavior. What’s more, it also found a relationship between all Dark Tetrad traits (except for narcissism) and the overall time that an individual spent, per day, commenting on the Internet.

In my observation, people whose peak of personal expression and identity is based on social media ‘combat’ — like hate bloggers and comment trolls — will frequently be slanderers, liars, bullies and deceivers.

They can be fixated and egotistical, lacking normal human empathy, apparently delighting in abuse of their ‘enemies’, and seemingly relish hurting others. Their activities: abusing, mocking and denigrating (say) road accident victims or people on a different ‘side’ of political debate to themselves or their ‘tribe’ reveal their character.

Do you believe that all these Dark Tetrad personality traits can be displayed without routinely exhibiting any actual day-to-day ‘psychological problems’ such as (say) clinical depression? I’m not sure. In some cases, stress and mental illness (albeit sometimes genuinely experienced), are deployed as an attempted Get-Out-of-Jail-Free card, a distraction, or a rallying cry for ‘reinforcements’ — basically seeking a defence of the indefensible.

Of (a little) comfort is the reported finding that these at-times alarming wingnuts are only a very small proportion of the online ‘population’, and that most right-minded people pay little attention to them, really, at the end of the day.

But try being on the receiving end of one of their hateful campaigns, and watch how it spills over into ‘real life’ and you may have a different point of view.

In pursuit of empathy

I recommend you read this interesting essay ‘The Empathy Vacuum‘ by Greg Knauss,* which in part says:

Those people who don’t need the help feel free to judge those who do.
They judge us by our failures and not our desire to improve. They judge us by our tools and not what we can accomplish with them. They judge us by their own standards, without a breath given to the possibility that a different perspective might exist.
Which is pretty much the Internet in a nutshell, isn’t it? Exposed to the entire spectrum of human enthusiasms, it’s basically impossible not to judge. Our empathy overloads and gives up and we sit, staring at the screen aghast, that somebody, somewhere might actually believe that what they’re doing is OK, is acceptable, is even appropriate.
Everybody is somebody else’s monster.

Everybody is somebody else’s monster. That’s quite a thought, isn’t it? Let it in for a moment.

Update: Quite a good column/witness statement on ‘online abuse’ from broadcaster Rachel Smalley, at NewstalkZB. Good on her.