« Put yourself in her shoes
Dodgem or dipstick? The miraculous rehabilitation of Chris Trotter from scheming Labour flunky to honourable lefty »

Images of death in the street

When I was a boy I had a school friend whose dad had been a Kiwi solder in North Africa and Italy during WW2. All the time I knew him, my friend’s dad, (let’s call him Charlie), worked at the Ngauranga meat works north of Wellington.

I learned in a ‘when in Rome’ fashion that my friend and his family would from necessity creep around their house on the weekends, trying not to disturb Charlie … to avoid incurring the lash of his fragile temper.

Most weekends, Charlie would plant himself in a chair in his small living room — sometimes in front of the TV or radio, sometimes with the newspaper or other reading matter, always with a wooden crate of beer flagons beside him.

A crate held five flagons. A flagon was two pints or 1.2 litres of beer. Five foot nothing Charlie would sit there and drink glass after glass until he’d drained all six litres of beer… or until he passed out trying.

So he would routinely drink himself into a stupor, passing through raucous, belligerent, and then quiet patches. Eventually he would slump in his chair, his Brylcreamed head lolling over his white singlet and grey strides.

Often we would make ourselves scarce, but if at home, my friend and I would listen for the sound of Charlie’s snores and sneak a look. My friend would sometimes steal some tobacco from his dad’s pouch in those circumstances.

One afternoon, Charlie had passed out and my friend I snuck like skulking hyenas into the lounge. By appearances, Charlie had been looking through an old chocolate box of small black and white photos which lay on his lap. Some of the curling pictures were scattered on the side table and on the floor around him.

A furtive look at the small but sharp prints revealed they were snaps from the war — pictures of dark haired bronzed soldiers dressed in ill-fitting uniforms squinting into the camera, some on deck, some arranged in front of various North African or Italian landmarks, I guessed. I flicked through some more of them and came across photos of bodies — men and women in civilian clothing lying dead in the street. Then there were some of people — civilians again — strung up, hanging from telephone poles or impaled on what looked like iron fence railings.

Who were these people? What had they done to merit execution in this fashion and this grotesque public display of their corpses? Why did Charlie have photos of them?
I never had the opportunity (or courage) to ask him.

It seemed the images were significant to him, since he had kept them and was reviewing them all these years later (in the late 1960s.)

It’s said there was a lot of undiagnosed and unaddressed clinical depression and what we would now label PTSD – post traumatic stress disorder – among WW2 veterans and combatants.

Looking back with adult eyes, I bet Charlie was processing his wartime experience for decades, while his wife and his two boys paid the price for the psychological damage he sustained. Walking wounded.

I was prompted to remember this today when someone tweeted a picture of Muammar Gaddafi lying dead. 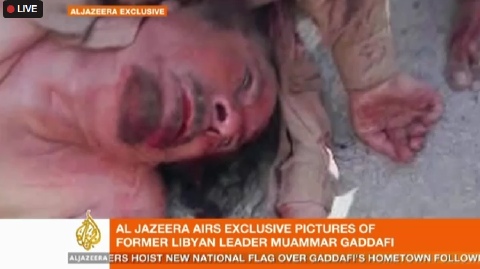 Images like this are more commonplace now, and I can see why it’s been reproduced in this case. (I don’t celebrate his death.)

But it did make me think of my friend’s dad … and the impact witnessing death in the street had on him.