« Jon Stewart on Fox News – Is this Crossfire Part 2?
Another dose of financial hyperbole … »

You may recall my post about the forces of [small-c] conservatism seeking to block an expression of Maori culture in the heart of Howick (where I live) despite support for it and an enlightened, respectful approach being taken by local Maori, their supporters and the local authority. The end result of the trenchant, truculent, long-term campaign by opponents to the rebuilding of a small community-owned meeting house (whare) — used mainly for programmes for local school kids — saw Howick’s community so-called ‘leaders’ (cough) fairly regarded as indulging in ‘a full-blown race war’.

Now Howick is in the media again with local politicians (the usual suspects) threatening to use the same failed tactics trotted out to try to stop the whare reinstatement in the Garden of Memories.

This time, they’re protesting and agitating about what can fairly be seen as a ‘not-in-my-backyard’ (NIMBY) reaction to Ministry of Education plans to establish a special unit — Thurston Place College —  helping school college-age kids from abusive backgrounds on the grounds of a site they formerly used for primary school kids with special needs. 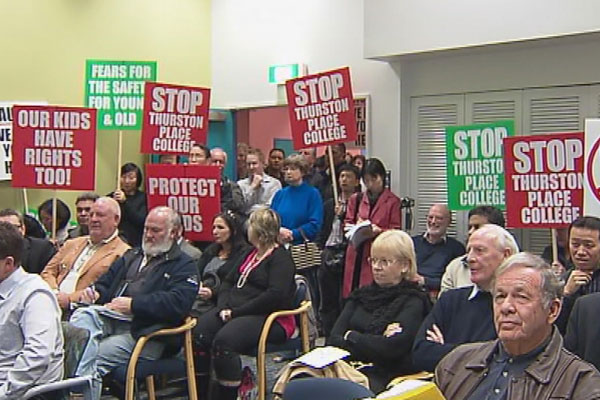 By Elizabeth Puranam TV3
Protests have continued tonight over a school for troubled children being built in an east Auckland suburb.
Residents of Bucklands Beach say the school poses a threat to their children and neighbourhood, and they’re planning on taking their fight to Parliament.
It was standing room only today as hundreds of Bucklands Beach residents met for the fourth time in less than two weeks to protest the building of Thurston Place College.
“New Zealand has a safe environment and a good education system,” says Yugen He. “That’s the main reason we moved here, but this college will create a lot of risk to our children.”
Thurston Place College will provide education for 100 children from abusive backgrounds. “These young people aren’t young criminals, they aren’t New Zealand’s worst young offenders,” says CYFS director Grant Bennett. “They are vulnerable children living in your communities.”
The Ministry of Education plans to build the college on a site which backs onto Pigeon Mountain Primary and Bucklands Beach Intermediate. It’s the site of the former Waimokoia Residential School, which housed 30 primary school students with special needs. “From the ministry’s point of view, we are simply replacing one special school with another,” says the Ministry of Education’s Bruce Adin.
But residents say Thurston Place College is different because it will hold 100 secondary school students. “It appears that they have relied on a previous designation for a different age of child and a different type of facility,” says Michael Williams of the Howick Local Board. The board plans to take their fight to the Environment Court.
They have written to Prime Minister John Key, asking him to intervene in the construction of the college. They haven’t heard back from him yet, but residents here told me tonight that they won’t be voting National in this year’s election if the college is built in their neighbourhood. — 3 News

Local board chairman and National Party member Michael (‘I am not a racist’) Williams has ‘sounded the battle cry’, according to the local rag saying,

“…the best way to fight this is with significant and visible community action…”
“…we got preliminary advice back on legal remedies from our staff. We asked them to look into opportunities for an injunction, judicial review and RMA [Resource Management Act] challenge…”
“We have asked a barrister to look into Resource Management Act issues around the school.”
“We can make it hard and long for [the Government] and force them to consult with the community.”

Trotting out the same formula: loud protests, threats of an electoral backlash, political agitation, angry, abusive comments at meetings, orchestrated ‘letters to the editor’, frantic searches for any legal issues which could be massaged or manufactured to oppose the project, public campaign to make politicians feel the ‘heat’.

All with what aim in mind? Keeping Howick ‘safe’? Please. What a fearful, self-centred bunch.

Perhaps the wannabe Mayor of Howick and his reactionary mates/local board accomplices should provide a list of who IS allowed to live or be educated in our suburb? Then they could issue ‘passes’ for those of whom they approve.

This community is happy to take any funding that’s going from the government or any other source to build our amenities etc … we’re happy to send our sewage and rubbish to other communities to deal with in facilities, but by god, we don’t want to disturb the tranquility of our closed-mindedness, do we?