« New media – it’s not about being impartial
Facebook. Brought to you by the letters ‘F’ and ‘O’. »

How to piss off an All Blacks supporter 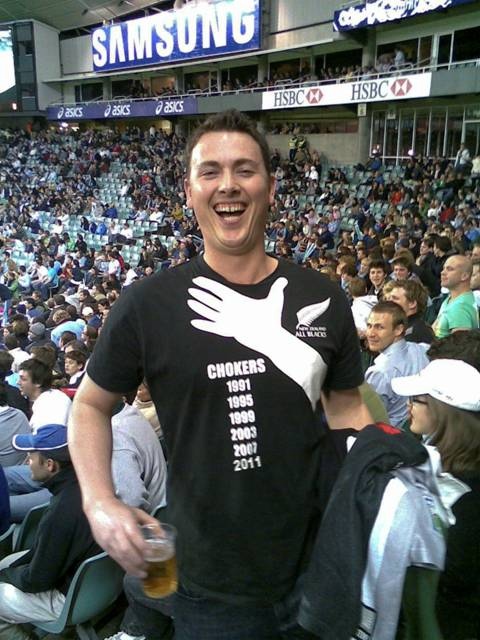 My expat Kiwi friend on the Gold Coast emailed me this charming little number. It certainly lessens my sympathy for the rarking up Aussie supporters have copped in New Zealand.

UPDATE: Apparently the Queenslanders are buying them from a South African T-shirt maker:

I made this one off t-shirt for a rugby union mad friend as laugh for his day out with his kiwi mates to the rugby just after the 2007 RWC. To my surprise, four years later, his photo has gone viral across the interweb. After a few days and some amazing detective work using Facebook recognition software and Google image search I was tracked down by some very clever Queenslanders and ordered to print more choker t-shirts. After 10 phone calls from customers around the world we have decided to do a limited edition print of the famous All Black choker t-shirts.
My Kiwi mates are spewing but hey after all the choker digs I get about the Proteas choking in the cricket WC its only fair to return the vollley. Sorry Kiwidave but until the monkey is off your back you have to kop it sweet mate.
— Kevin Rack.