Nice project by Luke Geissbühler and son Max, as reported by NY Mag … from my ‘reading’ of the video, I think the iPhone was used to track his ‘space capsule’, but the video itself was taken with a different (unspecified) bit of kit — not the iPhone, despite the report.

In a burst of science-is-fun educational invention, a Brooklyn dad built a carrier for an iPhone (the current model, with video camera) out of a takeout box, tied it to a weather balloon, and let it go with the camera running. It reached a height of nineteen miles, or about 100,000 feet, which is high enough to show the earth’s curvature and a black sky above the atmosphere.

At that height, the low pressure means that the helium expanded and the balloons burst, whereupon the phone (in its little cushioned capsule) came down, down, down — and landed 30 miles outside New York, signaling to its owners via GPS, whereupon they went and picked it up. The resulting six minutes of rivetingly weird film are sure to make Mythbusters fans weep with joy. 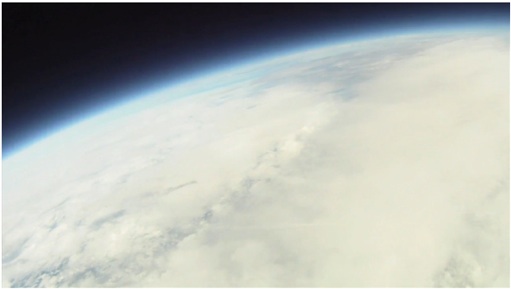