« Ironic juxtaposition
Breaking News and Opinion on The Huffington Post » 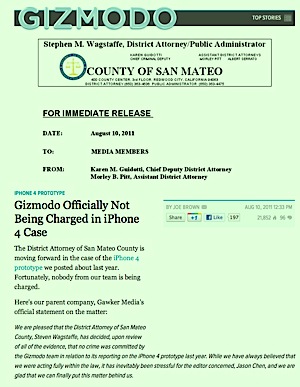 Gizmodo says 'Fortunately, nobody from our team is being charged.' That's a matter of opinion.

News is that Gizmodo, who reportedly paid the finder of the lost/stolen iPhone4 prototype $5,000 for umm, ‘exclusive access‘ to the device (cough, — so they could photograph it and dismantle it and plaster images of it on the web) won’t be prosecuted for those activities.

District Attorney Announces Filing Decision on Misappropriation of iPhone
The San Mateo County District Attorney’s Office has filed misdemeanor charges against two individuals for the misappropriation of an iPhone 4 prototype that was lost by an Apple employee and subsequently recovered in a Redwood City establishment by the defendants on March 25, 2010.
Brian Hogan, 22, of Redwood City was charged with one count of misappropriation of lost property, and Sage Wallower, 28, of Emeryville, was charged with misappropriation of lost property, and possession of stolen property. Their arraignment is scheduled for Thursday, August 25, 2011 at 9:00 in Redwood City. After a consideration of all of the evidence, it was determined that no charges would be filed against employees of Gizmodo.

OK, so church goer Brian Hogan who, instead of picking up the phone and handing it in to the management of the bar where he ‘found it’, took it home and sold it to Gizmodo — oops, sorry, he sold ‘exclusive access‘ to Gizmodo — will face charges. But the by-my-definition ‘receiver of the stolen property’ (Gizmodo), won’t. Hmmm.

Prosecutors no doubt weigh their cases and make decisions about such things. Fair enough.

Watch Gizmodo’s spin as they extrude that decision just a little bit past the point of credibility with this ‘official statement’ from parent Gawker media:

We are pleased that the District Attorney of San Mateo County, Steven Wagstaffe, has decided, upon review of all of the evidence, that no crime was committed by the Gizmodo team in relation to its reporting on the iPhone 4 prototype last year. While we have always believed that we were acting fully within the law, it has inevitably been stressful for the editor concerned, Jason Chen, and we are glad that we can finally put this matter behind us.

Gee, it’s like, gone from “… it was determined that no charges would be filed employees of Gizmodo” to “no crime was committed by the Gizmodo team” … That’s NOT QUITE the same thing, really, is it?

As for ‘put this matter behind us’. Yeah, sure. Uh huh. Let us know how that’s working out for you, … especially since Brian Chen’s blackmail note in response to Apple’s request for their property to be returned is on the record all over the web:

Hey Steve, this email chain is off record on my side

I understand the position you’re in, and I want to help, but it conflicts with my own responsibilities to give Ihe phone back without any confirmation that its real, from apple, officially.

Something like that — from you or apple legal–is a big story, that would make up for giving the phone back right away. If the phone disappears without a story to explain why it went away, and the proof it went to apple, it hurts our business And our reputation. People will
say this is a coordinated leak. etc

I get that it would hurt sates to say this is the next iphone I have no interest in hurting sates That does nothing to help Gizmodo or me.

Maybe Apple can say it’s a lost phone, but not one that you’ve confirmed for production -that it is merely a test unit of sorts. Otherwise, it just falls to apple legal, which serves the same purpose of confirmation. I don’t want that, either.

Gizmodo lives and dies like many small companies do. We don’t have access, or when we do. we get it taken away. When we get a chance to break a story, we have to go with it or we perish. I know you like walt and pogue, and like working with them, but I think Gizmodo has
more in common with old Apple than those guys do. So I hope you understand where I’m coming from.

Right now, we have nothing to lose. The thing is, Apple PR has been cold to us lately It affected my ability to do my job right at iPad launch. So we had to go outside and find our stories like this one, very aggressively.

I want to get this phone back to you ASAP And I want to net hurt your sales whan the products themselves deserve love. But I have to get this story of the missing prototype out, and how it was relurned to apple. with some acknowledgement it is Apple’s.

And I want to work closer with Apple, too. I’m not asking for more access – we can do our jobs with or without it – but again, this is the only way we can survive while being cut out of things. That’s my position on things.

Of course, who The San Mateo County District Attorney’s office decides to prosecute, and for what, is up to them.

Related:
Stating the obvious/sympathy for the dev… uh, Gizmodo’s Chen
iPhone ‘finder’ – a real sweet guy according to his attorney
Damage control re 4G iPhone: NOT ‘sold’, just ‘exclusive access’
iPhone thief’s accomplice stashes evidence at church(!) plus Gizmodo’s shameful blackmail …
What ‘letting it slide’ can cost you