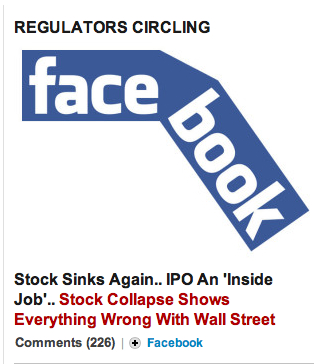 … the Facebook IPO had examples of pretty much everything that is wrong with the stock market today. Media and analyst cheerleading? Check. The destructive influence of high-speed trading? Check. A system built for insiders to profit while retail investors pick up scraps? Duh.

“This constantly erodes the confidence of the average investor,” said Joseph Saluzzi, co-head of stock trading at Themis Trading. “It’s why we see money coming out week after week from stock mutual funds. People are tired, frustrated with it.”

Facebook’s stock price was down Tuesday more than 4 percent to less than $33 a share. After months of hype leading up to the social network’s initial public offering, the stock is down 14 percent from its IPO price of $38 and nearly 28 percent from its $45 peak on Friday, its first disastrous day of trading. The company has lost about $15 billion in artificially inflated paper market value in less than three days. Update: Things got a lot uglier after we filed this post: The stock ended trading Tuesday down nearly 9 percent at $31. That’s an 18 percent decline from the IPO price and a 31 percent drop from its peak price on Friday.