« A rebel general has been killed by the Empire
Welcome to the mainstream, social media (like, again) »

One of the topics we muse about here on ThePaepae.com is various attempts people make to masquerade as things-they-are-not.

e.g. Dean Letfus as an unbiased and experienced ‘property expert’, Shaun Stenning as an ‘internet marketing expert’ who has ‘made millions’, Sean Wood as a ‘satisfied customer’ of (ahem) Sean Wood, Bernard Whimp as a straightforward shares buyer, Steve Goodey as an astute judge of character, David Whitburn as a whistle-blower of muscular conscience, Mark Hotchin as a hard-done-by businessman whose company was designed to ‘withstand any conditions’ but fell over like the other anemic and shonky finance companies …

I am, I freely admit it, (negatively) opinionated about these mime artists and the just desserts fate that is unfolding for them, in some cases.

But it seems dubious behaviour isn’t limited to the low-rent end of the crowd. 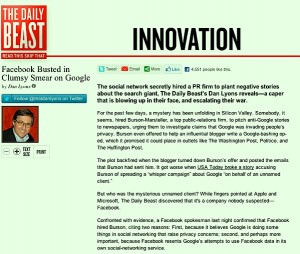 Last night the news emerged from Dan Lyons (ex Fake Steve Jobs) writing on The Daily Beast that Facebook had hired a PR company to ‘smear’ Google over [alleged] ‘privacy issues’. You read that sentence right: Facebook, wanting to shine light on somebody else’s privacy-busting practices. (I know, right? Ironic.)

Leave aside what the heck Facebook was trying to achieve by it’s derogatory whisper campaign. They’ve been caught.

The poor ol’ PR company, Burson-Marsteller, comprehensively busted by Dan Lyons, refused to confirm Facebook had hired them for the nefarious tasks, until Lyons’ piece forced FB to admit it (with attendant disgrace and BAD publicity) thereby freeing the spin doctors to spin an implausible ‘Ack! We shouldn’a dun it. We only did it against our better judgement’ lullaby: 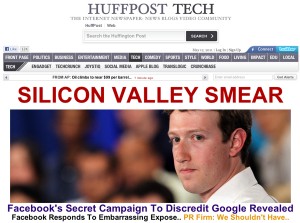 Be sure your sins will find you out, Mark Zuckerberg.

Now that Facebook has come forward, we can confirm that we undertook an assignment for that client.

The client requested that its name be withheld on the grounds that it was merely asking to bring publicly available information to light and such information could then be independently and easily replicated by any media. Any information brought to media attention raised fair questions, was in the public domain, and was in any event for the media to verify through independent sources.

Whatever the rationale, this was not at all standard operating procedure and is against our policies, and the assignment on those terms should have been declined. When talking to the media, we need to adhere to strict standards of transparency about clients, and this incident underscores the absolute importance of that principle.

Oh, yes. (Sarcasm alert:) You’re normally soo transparent, aren’t you Burson-Marsteller? Of course you are. It’s soo out of character for advertising types to mislead people, of course. You poor babies.

No. Sorry. It was sleazy.

What a dumb idea. Almost as dumb as the original idea to data scrape from social media sites.
– P