« James Arthur Ray on trial for being a bully-boy
Dan Conover: Advertising is not enough » 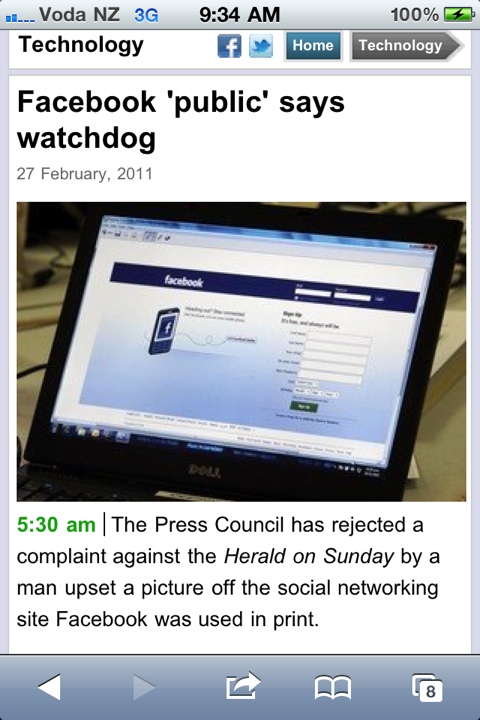 The Press Council has rejected a complaint against the Herald on Sunday by a man upset a picture off the social networking site Facebook was used in print.

Api Hemara said the picture, run in a report last November that recounted the trial in the UK of a number of men who beat him up, had caused him distress because it was used without his permission.

He felt violated, first by the attack, then by use of the photograph.

Herald on Sunday editor Bryce Johns said extensive efforts had been made to contact Hemara and all of the information in the story was on the public record.

He had offered Hemara $150 for copyright.

In its decision, the Press Council said using a photo off the website was not a breach of its rules.

“Facebook is not a private space but a public sphere and the Press Council has cause, yet again, to remind users that despite the best intents of individuals, it is not easy and not always possible to protect privacy.”

It’s too early to read the ruling on the Press Council’s website (it hasn’t been uploaded yet), but it might be interesting …

Personally, I wouldn’t be put off by the Council’s ruling that the Herald or anyone else infringing my privacy “was not a breach its rules”. Pfah! “… it is not easy and not always possible to protect privacy.”

Reminds me of the title of a book my daughter read and enjoyed: And That’s When It Fell Off In My Hand.

“Oh dear,” the Press Council seems to be saying. “How regrettable you feel ‘violated’ and your privacy has been infringed — but that’s not against our rules.” (Assuming the HoS is reporting them correctly.)

Riiighht. (When does the campaign to infringe the privacy of individual members of (the self-regulatory body) the Press Council start? Now? Let me see … )