« Social engineering!
Spotted on a wall. Fill in the last part. »

Dumb headline apart, this exchange between Keller & Greenwald on journalism is a great read 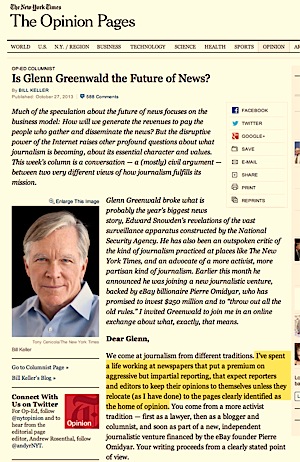 A seriously good read. Go ahead: Is Glenn Greenwald the Future of News? — NYTimes.com

We come at journalism from different traditions. I’ve spent a life working at newspapers that put a premium on aggressive but impartial reporting, that expect reporters and editors to keep their opinions to themselves unless they relocate (as I have done) to the pages clearly identified as the home of opinion. You come from a more activist tradition — first as a lawyer, then as a blogger and columnist, and soon as part of a new, independent journalistic venture financed by the eBay founder Pierre Omidyar. Your writing proceeds from a clearly stated point of view.

My reaction to it may be different to yours. So, let me know.

This is relevant too:

from Alan Rusbridger, editor of The Guardian, in an article about the Edward Snowden revelations, The Snowden Leaks and the Public — New York Review of books

The Guardian itself inhabits an editorial space that is quite distinct from most American newspapers. British papers have grown up with less reverence for the notions of objectivity and detachment that can, rightly or wrongly, preoccupy some of our American colleagues. The paper started as The Manchester Guardian—an outsider to the sometimes cozy world of Fleet Street. Though it’s long since dropped “Manchester” from its masthead, its mentality is still that of the outsider—and it’s fair to say that it is regarded by some British journalists with the sort of distrust that members of a club feel about visitors.

Update: Summary of the Keller/Greenwald interchange by Mathew Ingram here —
Glenn Greenwald vs. the NYT’s Bill Keller on objectivity and the future of journalism