« Silence and the abandonment of moral leadership
Keeping your distance » 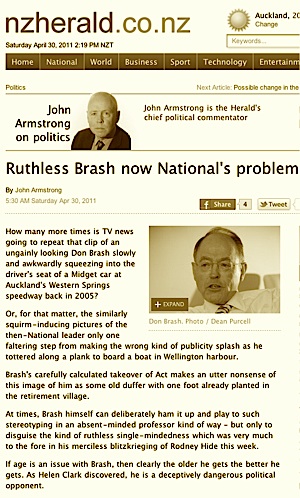 I like (agree with) John Armstong’s analysis of the nothing-if-not-brazen Don Brash takeover of ACT. And I agree with his take on whose political problem his ascendancy is… “With Labour down to its core support, the only source where Brash can realistically pick up votes is from National”.
Yup.

… As Helen Clark discovered, he is a deceptively dangerous political opponent.
He may give every appearance of being a refugee from a more genteel political era.

But his politeness, his disarming demeanour, his seeming reasonableness, the reasoned nature of his arguments, his seeming frankness (“frankly” is one of his favourite words), his willingness to acknowledge other points of view (even if he discounts their validity), plus his huge credibility built up during his years as a Reserve Bank governor all help him reach audiences other politicians can only dream of touching.

His ability to communicate so effectively with the electorate was once Labour’s problem. It is now National’s problem.
In staring down Hide to become Act’s new leader, Brash has drastically altered the whole election-year dynamic. …

But, gee, if John Banks as MP for Epsom is the answer, what was the question?