Defamation? Or law of consequences? 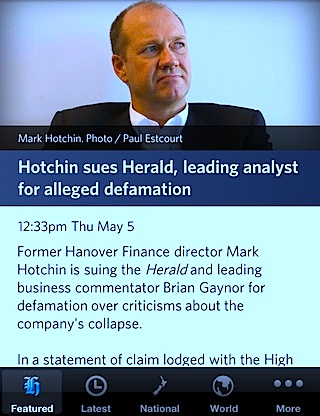 Hotchin's statement of claim 'referred to a number of columns and a profile feature published in the Weekend Herald between 2008 and 2011. It says the articles had damaged his personal and commercial reputation and caused him to lose commercial opportunities in Australia and New Zealand' (NZ Herald - click)

Spruiker Mark Hotchin — the face of Hanover Finance (claiming in its TV ads: “This One Weather Update is brought to you by Hanover, a New Zealand business with the size and strength to withstand any conditions“)*, whose operation broke promises to 16,500 investors leaving them out of pocket $554 million and subject to a questionable arrangement with Allied Farmers which apparently ended his liability … is suing the NZ Herald and Brian Gaynor for defamation because their criticisms [allegedly] cost him reputation and opportunities.

Um, gee, what about the outcome of your business, Mark? Maybe that’s what affected your reputation and opportunities? Just a thought.

Maybe it was the news that the Serious Fraud Office is investigating your business and affairs and the Commerce Commission has frozen your assets in anticipation of there being (ahem) a call on them?  Could those Google-able FACTS have affected your reputation and opportunities?

*Other businesses using that or similar slogans:

Robust, durable and reliable trucks that get the job done. Scania mining trucks are built to withstand the toughest conditions over a long operational life on and off the road.

The display shows the data in clear, easy to read digits, with both primary and secondary readouts. Built to withstand the toughest conditions, it also allows the user to access a comprehensive range of information – at the press of a button…

Toshiba’s EQPIII motor line is the cornerstone of our product offering. Built to withstand the toughest conditions, all of our EQPIII motor products offer some of the highest efficiency and torque ratings while producing some of the lowest vibration ratings in the industry, leading to a longer life and greater reliability.

ALTAMA Combat boots are made to withstand the toughest conditions of both battle and the environment.

ICA’s SportsFrame structures are built solid to withstand the toughest conditions, including wind, rain, and snow. In fact, its standing seam roof has a life expectancy of over 20 years.

Imagine if any if these overt claims of durability and ‘being built to withstand the toughest conditions’ ended up being as hollow and anemic as Hanover Finance’s (not to mention the moratorium ducking and diving and dividend payout shenanigans).

Who would they (say Scania mining trucks) sue for “defamation” if their failure to live up to their promises of strength and hard-wearing toughness were pointed out in the news media and discussed by analysts, eh Mark?
Duh.

Your business deserves the scorn, in my opinion. And you were its face.
– P

Serious. To quote Cactus Kate: “To keep the freeze precisely as it stood on Thursday would be a signal to Hotchin that he is in serious stoock.”
Yup.

UPDATE: Or, not so much. A lot has been unfrozen, despite the headline, apparently. Read this, if you care – Cactus Kate: Huge Wins For Hotchin