« A development in Singapore for Shaun Stenning Twalk refund seekers
A voice in the wilderness? Or reclaiming the Grey Power mantle? » 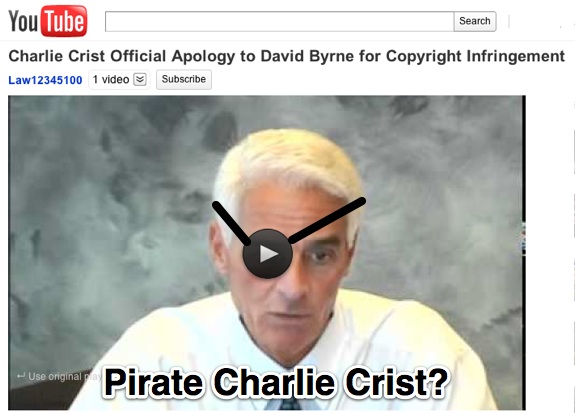 Senate candidate Charlie Crist does a bloody good job of dealing with the fallout of someone in his campaign using a song without permission. April 2011

Here in New Zealand, our Parliament has just passed an amendment to our copyright laws which sets up a system of new fines and warnings to illegal file-sharers which, if they repeatedly ignore them, can see them disconnected from the internet (Quelle horreur!).

People who breach copyright through illegal file-sharing could be fined up to $15,000 or have their internet connection cut off – and the onus will be on them to prove they are not guilty.
The entertainment industry hopes the law will scare people out of downloading songs or video through sites such as Pirate Bay.
The Copyright (Infringing File Sharing) Amendment Bill passed its third reading yesterday, ending two years of heated discussion and an online “blackout” protest on sites such as Facebook and Twitter. — ‘Net piracy: prove innocence or face fine’ – NZ Herald

Of course, piracy is only one aspect of copyright infringement. If you haven’t seen it yet, watch US politician Charlie Crist eating smelly toads as he apologises for his Senate campaign’s (mis)use of the David Byrne/Talking Heads ‘Road to Nowhere’ song in a widely-distributed campaign video without permission last year. Ouch. It’s very hard to argue fair use (or what the NZ copyright legislation calls ‘fair dealing’) for such exploitation of an artist who apparently does not allow his work to be used in advertising.

But Crist does a very good job of personally delivering the apology. He’s a man about it. Best line:

I pledge that, should there be any future election campaigns for me, I will respect and uphold the rights of artists and obtain permission or a licence for the use of any copyrighted work.

Watch the video below the fold…

My own small experience with copyright infringement was settled (after a bit of argy-bargy) with an admission, a promise not to do it again, and a payment in damages. Unfortunately, I don’t think my authors and I were dealing with someone of Charlie Crist’s obvious intellect and morality. (Just the opposite, in my opinion.) There was no way we were going to get a sincere apology of the sort Crist delivered, even though that’s what we deserved for the cynical, comprehensive, completely unattributed verbatim use of our intellectual property in a commercial context.

Read about what Google is trying to do to ‘teach’ copyright infringers about the rules for YouTube:

… The new updates unveiled Thursday allow users to watch a new tutorial video about YouTube’s copyright policies and access a redesigned copyright help center.
In addition, Google instituted new policies for users who are found to have violated YouTube’s copyright rules.
If YouTube receives a copyright notification about a user’s video, the user will have to complete “YouTube Copyright School,” which requires watching a tutorial video and passing a quiz to prove the user understands the copyright policies. …